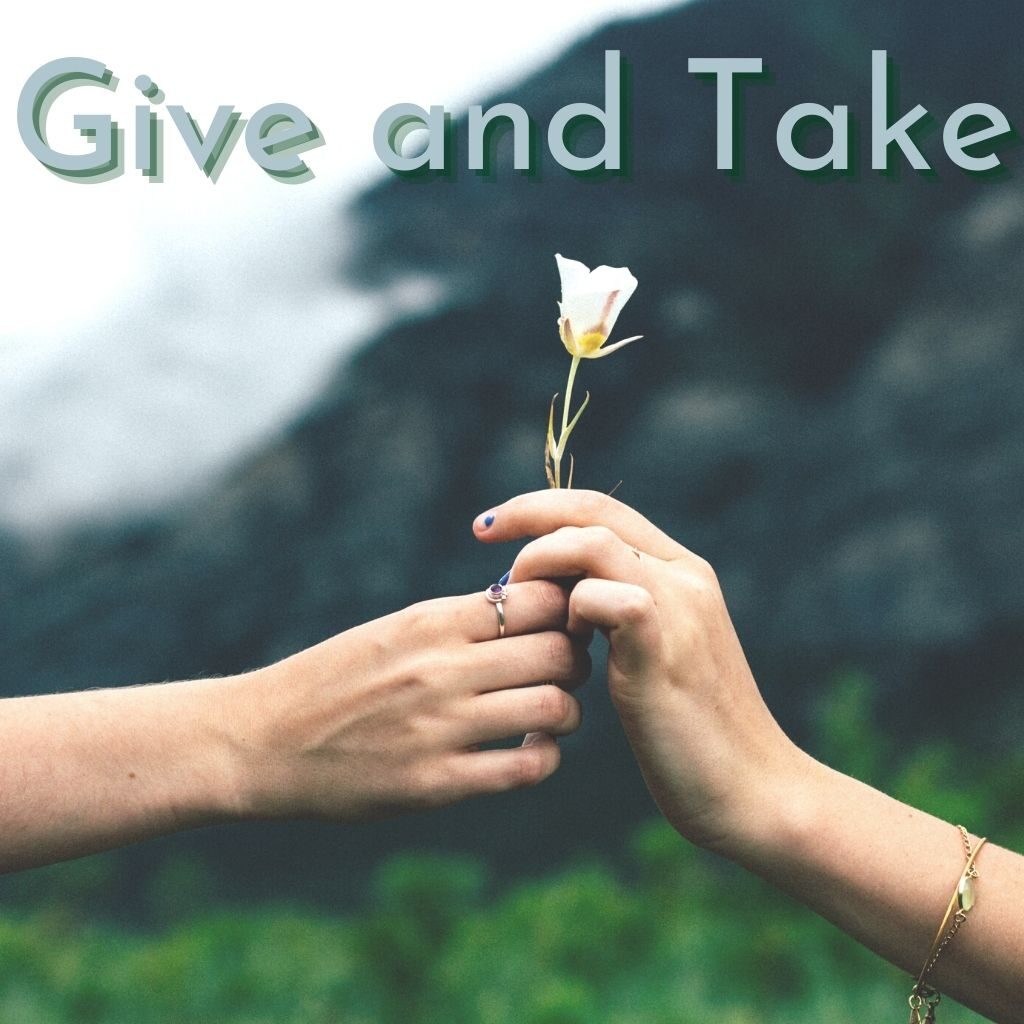 I have spent a long time healing imbalanced relationships.  For a long time, it didn’t seem to go anywhere.

I cannot say that I have completely healed this problem now.  I think I have gotten it to a more bearable level.  From my current vantage point, I am discovering different qualities of it.

There is one thing that has been lingering on my mind, off and on, for the last little while.  It didn’t completely fade into the background unconscious level over time.  It’s a phrase that someone said to me, twice, in two separate occasions.  And in both times, I was immensely touched and awed, but my feelings didn’t fully come out maybe because he said it so casually, like it was no big deal.  Yet, it hit me at a very deep level.  So through the passage of time, this phrase re-surfaced to hit me repeatedly.  And each time it hit me, I sensed its impact at a different level.

What touched me was that I was resisting something coming in, imposing upon me, and when I slipped out of that thing, effortlessly almost like a slime, instead of putting up a fight with it, what the other side said to me was, “No worries, you don’t have to force yourself.”  In other words, he was accepting and supportive of my choice even though it went totally against his wish.  I was very touched by his acceptance and respect and understanding for my choice.  And the fact that he was able to switch gears in an instant awed me.  He was clearly pushing, but the fact that he could release so swiftly and switch into a neutral or even slightly positive position awed me.

But when I moved past my own emotional reactions, what I saw was that my resistance was also blocking me from receiving nourishments.  The wall was not only blocking out what I didn’t want, but also what I did want.

I realized this in the second time he said it, because there was another part of our conversation where I said I didn’t feel comfortable receiving so many things from him, and that was another reason why I had my resistance.

That other part of our conversation has a deeper root, stemming from low self-worth, which makes me think that I shouldn’t and couldn’t receive.  Hence the wall.  Hence the imbalanced relationships where those who come to me only do so to get something from me, instead of to give something to me; and they have no interest or reason otherwise to come to me.  For a long time I wasn’t able to flip that around.  Even with the guy upstairs, whom I have written in the last two articles, I am still not able to flip it around.  But I think I am seeing the structural lock of my imbalanced relationship.  There is a structural pattern or a group of pathways that locks in a certain dynamic between me and the other side.  It’s almost like a mold.  When I interact with the other person, I step into the mold, I say and do certain things, and the other side also operate in exactly the same mold.  Maybe to step out of the imbalanced relationships, my whole operating system needs to change, because there are fear, guilt, duty, inferiority, etc., all jammed into that system.

When I see more and more of the causes of my imbalanced relationships, I realize that the universe is indeed trying to get me to a more balanced position, to a place of being nourished, respected, appreciated, valued, supported, etc., but it can’t happen without me consciously unleashing whatever else was also jammed into my system.  But it isn’t just a matter of listing out all of the items; it’s also about seeing the relationship among them, how they intertwine and compound together to create my reality.

I have started taking a different approach last weekend—healing my sacrum and coccyx.  Different sources have different metaphysical understandings of this region.  According to the Taiwanese teacher, this area relates to one’s right to exist, one’s place on the planet, one’s sense of belonging in this world, etc.  Therefore, the focus of this healing is very pertinent to my own life, as I was born stateless, without citizenship, which effectively means that I don’t have a right to belong to my birthplace.

This problem is interlaced with other problems such as low self-esteem, fear, guilt, distrust, insecurity, powerlessness, helplessness, etc., which all work their ways into a relationship, resulting in all sorts of imbalances.  As I work through my problem of giving more than taking in a relationship, I realize that the actual scope of this problem is beyond what I can consciously perceive, and I have not listed all of the components out yet, because there are also an ancestral part and a soul part that resulted in me appearing in a corner of this planet that did not accept me.

Since the magnitude of the project is bigger than I can perceive, one of my first psychological adjustments is to see that the destination is not the goal, which means, instead of focusing on the destination, focus on the present.