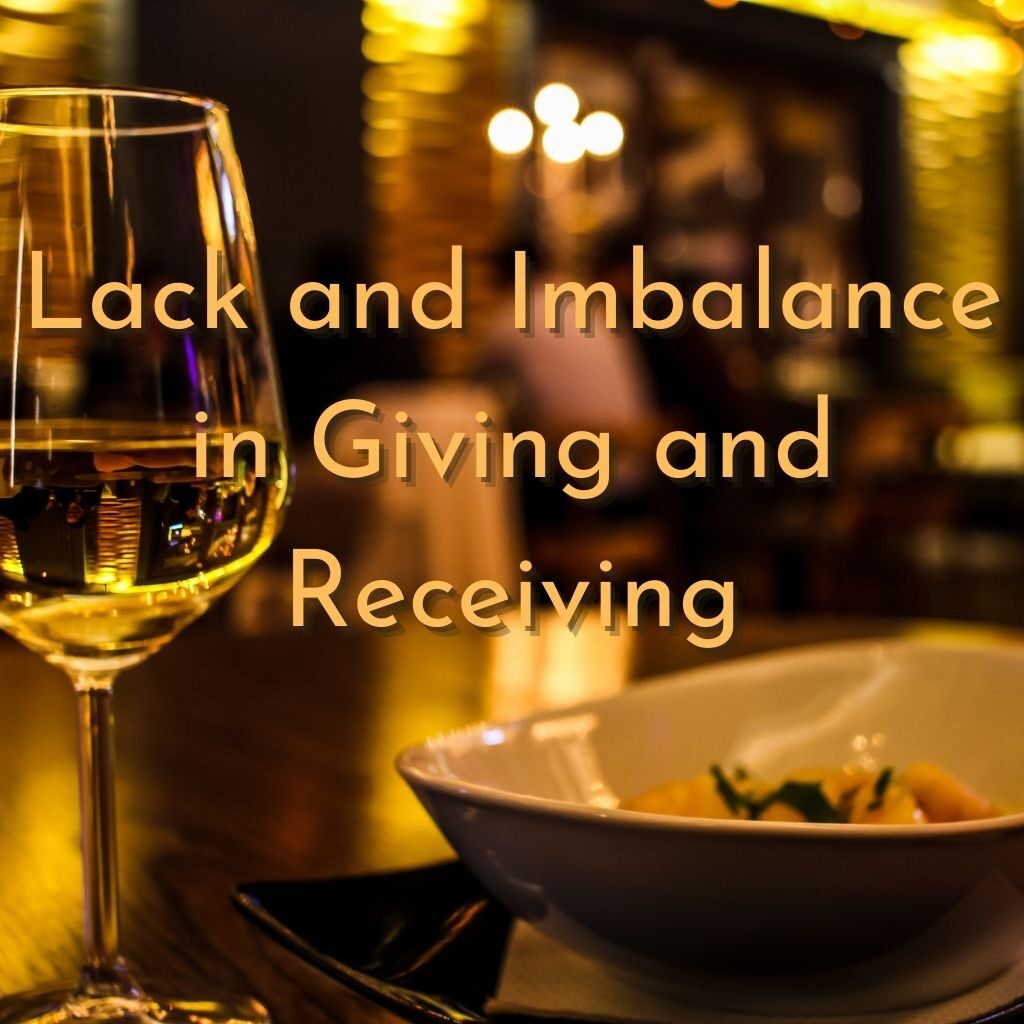 Lack and Imbalance in Giving and Receiving

Lately, in the presence of my friend Patricia, I have been observing the different manifestations of lack and imbalance in give and take, two of the themes that I have been trying to heal.  Sometimes I am amused, sometimes I am shocked.

One day, me and Patricia went for lunch at a restaurant that NN recommended.  Her order was very disappointing (I didn’t even want to touch it), even though its appearance was very appealing.  My order, Hainanese chicken rice, something that NN commented as fairly decent, was somewhat satisfactory—both the rice and the chicken were decent, though the rest of the order were so so.  And the restaurant itself was okay, not something that me and Patricia would especially like, but could accept.  So when I looked at the energetic level, I saw the levels of lack of the three of us:  Patricia’s lack was most intense, NN’s lack was average, my lack was camouflaged and not clearly manifested because NN’s preference overrode mine.

Another day, me and her and John 3.0 went to a hotpot restaurant that 3.0 recommended.  The idea (and craving) of eating hotpot was 3.0.  The way it manifested was that we ended up at the restaurant much later than originally expected:  he was thinking between 6 and 7pm, but we arrived after 8pm.  In between that time, both mine and Patricia’s needs were met first, so his had to be postponed.  While dining, I was surprised at two points:  1) Patricia’s stove didn’t heat up much—lack; 2) her soup base was relatively tasteless—lack.  The amusing thing was, even before I tasted her soup, I already knew that her choice of soup base would not be as good as mine, because I had already seen more than enough manifestations of her lack (it was way too loud), so when I finally took a sip of it, I thought, ‘Oh my, what would be the most neutral adjective I could use to describe this taste?’  In contrast, I loved my soup base!  She tried it, and loved it too!  3.0 didn’t try, nor did I offer him to, because when I first met him, I already saw his personal boundary.  But it was interesting to note that his comment of his own soup base was okay, there was something about the taste that he didn’t like, and that was a manifestation that I had observed a couple more times in other settings where his order didn’t quite match his expectations.  In other words, that was his pattern of lack.  Another observation from that night’s dining was that 3.0 would take care of me first, and Patricia much later, almost as if he had just remembered much later that he had to be fair to her too.  That’s a manifestation of give and take—me receiving more (attention) and first, her receiving less and later, him giving but not receiving.  Toward the end, he said he had to go get something, I think he said napkins, and I think he primarily said it to me and not to her.  I said okay.  Then we realized, he also footed the bill at the cashier.  I was surprised.  Not by his giving gesture, but by him blocking the opportunity for us to pay by taking action first and unannounced.  I would have been more than willing to pay for him, because I saw his underlying energetics quite clearly and it saddened me.

Last night, Patricia wanted to dine out and asked me where to go.  I suggested New Asian Village.  But she ended up choosing Punjab Platter.  I said okay.  She ordered most of the dishes, my only input was the choice of bread and my drink.  The outcome was, none of the three dishes she herself chosen for the both of us were impressive; they were only so so acceptable.  The bread, something that I inserted my own energy into choosing, was good for both of us.  And my drink? Perfect!  The customer service? Not quite acceptable to me, but somewhat acceptable to her.  So you see, the energy that each of us put in to that dining experience very much corresponded to the emotional return each of us received from it.

That led me to understand, when we combine our energies to carry out a task, the manifested outcome is the combination of our energies.  But more than that, you can see whose energies are overriding whose, whose energies are stronger, whose energies are pulling the rest of the team in which direction, etc. And I come to realize, I need to assert myself more at the ambient, overarching, and structural level; because in every one of the above scenarios, I was merely saying okay to other people’s choice of where to go, I was not leading but following.

When I was living under the same roof as Patricia and 3.0, I noticed that my imbalance in give and take was the least severe compared to theirs.  But when I am at my condo, I find that my imbalance is more severe than my neighbors, because they always come to me when they need something from me, and even when they just want to connect to me, they have to find an excuse to ask for something from me, instead of coming to me to offer something to me.  I am not sure how much I have healed thus far, considering the milestone I have reached a couple days ago with NN, I think at this point I need to focus on paving a path (neurologically, behaviorally, energetically) to open and receive.

Another point I observed in relation to giving and taking is that, even when one side is more tilted toward giving and the other side toward receiving, the object of giving and receiving may be different and may be the deciding factor of who is contributing and who is receiving.  For example, I give a lot of my time and attention to Patricia while she gives more money; I gave more acceptance and understanding to 3.0 while he gave more knowledge.  If I were to give more money to Patricia and demanded more time and attention in return from her, this relationship would cease immediately. Likewise, if I were to give more of my knowledge to 3.0 and expected more acceptance and understanding from him, there would be no room for conversations.

In this way, I am fascinated and intrigued by the nature of our bonds while I try to heal my imbalance. And my awareness of the nuances of our manifestations helps me to tweak my own energies, to manifest more accurately what I desire.