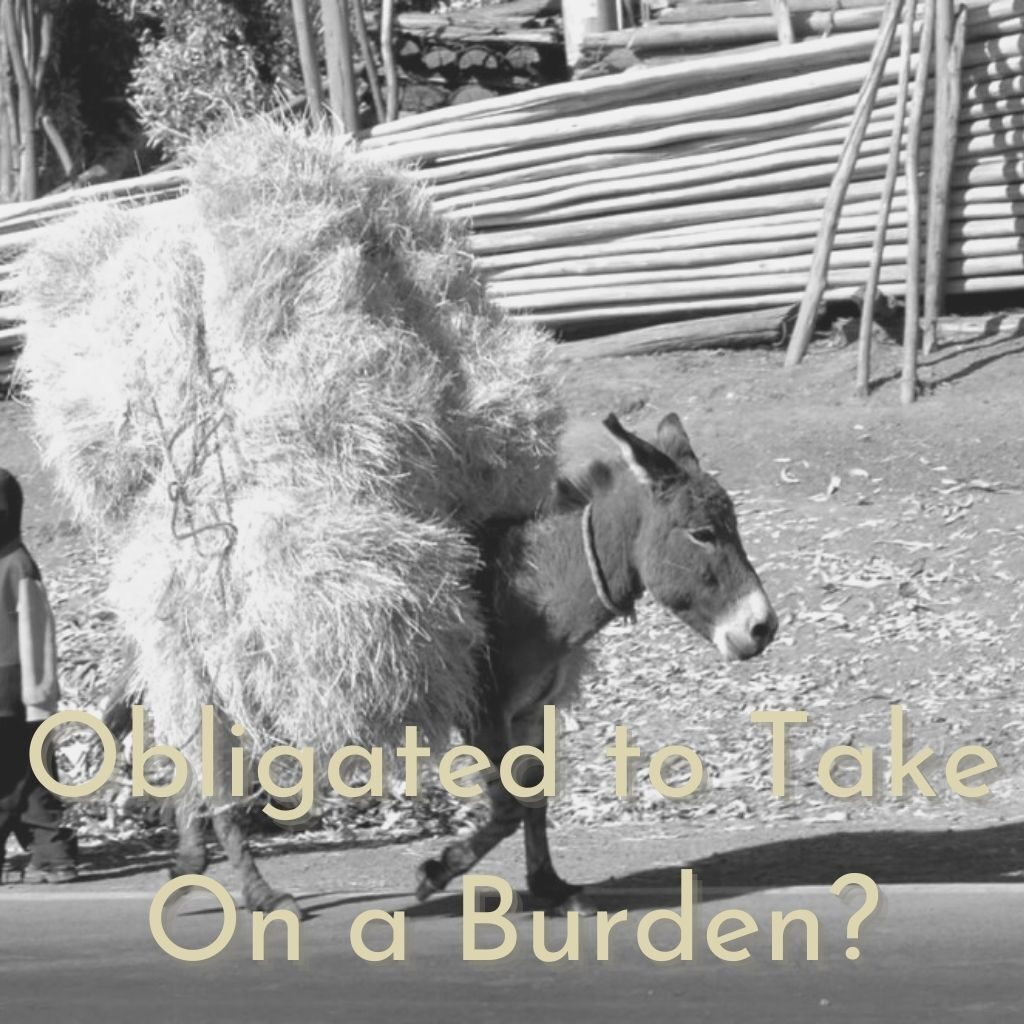 Obligated to Take On a Burden?

Yesterday afternoon, NN came to take Pepper home for the night.  Not sure why.  But in the absence of Pepper, my friend Patricia asked me, “Do you miss Pepper?”

“No,” I said resolutely and immediately.  Then it became very clear to me that Pepper was a burden to me.  Without her presence, life suddenly became so much calmer and I could relax in my own home.

What I noticed in Pepper was his inner instability.  He could not calm down!  And he needed a lot of attention.

Today, with the conscious awareness that NN was offloading his burden onto me, I started to scan within myself, because I wanted to treat this problem immediately.  Then I came to a realization that the things that I acquired or inherited from those close to me were actually things that they didn’t want or couldn’t want, either way, those were energetic burden instead of treasure.

Instead of feeling Pepper as a treasure, because energetically, she didn’t come to me as one, I felt only burden.  Not only did I feel a sense of heaviness, but a deprivation of my freedom.

NN wanted me to take care of Pepper so that he can move to another city, saying that he would come and visit sometimes, but he would not want to fly back just for the sake of seeing his dog.

What he was actually saying that Pepper was not something important enough for him to want to come back to see.  So I thought, ‘Wow, if it was Phil Phil, and if I happened to leave him to someone’s care, I would fly halfway around the world for him!’  It’s not a heroic act.  It’s only a reflection of how much I am willing to love myself.  How we treat our plants, animals, children, and inanimate possessions is a reflection of how we treat ourselves.

So while I was scanning the underlying energetics that created this situation, I came to realize that I was an offloading station for those who were close to me or wanted to come close to me, in the sense that they could only connect to me through responsibilities, duties, obligations, sacrifice, burden, etc.  It’s not exactly because they wanted to devalue me, it’s more so because that’s the only energetic pathway I have for connection with others.  I do not have another energetic pathway for them to connect me through.

In my scan, I saw many situations of such energetic formula.  In the workplace, in family, in social circle, etc.  To be more precise, the bridge between me and others is thickly clogged up by burden.  I have no other way to connect with others.  I can only connect by doing.  Alternatively, if I come across people who has a similar vibration but is more intense than mine, then I connect with them by having them do things for me.  Either way, in human connections, I can either be on the receiving or giving end.

After scanning and clearing whatever I could in relation to being seen and valued and connected as an object whose value and purpose were to serve and satisfy others, I returned NN’s message.  He wanted to bring Pepper back to my home today.

“Can you bring him back later tonight?”  I replied.  Now that I think about it, I should have said, ‘I cannot take him in anymore.’  My struggle was, the energies of obligation was activating in me as I talked to him.  Moreover, the following imprint was also activating within me–if I failed to fulfill the obligation, I would be met with threat, guilt, shame, etc.

I didn’t like the idea that I am to take care of Pepper for him so that when he wants to come back to visit, he can, and if he wishes to take Pepper back, he will.  But no guarantee what will happen.  And I wonder if I would be responsible for the medical fees, if any, and in the worst-case scenario, if Pepper were to die in my care, what do I do?  Tell him it’s not my problem?  Even though that’s true, saying it would just invite a punch in the face.  Although the person who should be punched should be him, since he is the one who doesn’t want to take on his own problem.

When he first asked me to take care of Pepper, he said he would give me a nominal amount of money, not sure what the money was for.  I think it was meant to cover Pepper’s expenses rather than to remunerate me.  But as things progressed, he’s not going to pay me but wants me to co-own the dog, and wants me to pay for the expenses upfront.  This situation of constantly sliding terms and conditions is exposing more and more of my wound, and now I find myself NOT wanting Pepper at all!

“I want to tell you something.  My friend Patricia is a bit allergic to Pepper, and I suspect my other friends might be too.  That means if I happen to go traveling, I will most likely … … … give him away.” I told him over the phone.  But that last part practically refused to fall out of my mouth, and I was trembling.  Then I realized, I had the trauma of being psychologically assigned to be an offloading station by force.

“When you need to go travel, let me know.  I will get my friend to take care of Pepper,” he said.  That’s a contradiction from before when I asked him twice why he chose to give the dog to me, and his answer was, “None of my friends wanted him.”

I will try to heal all the way until the situation collapses on its own.