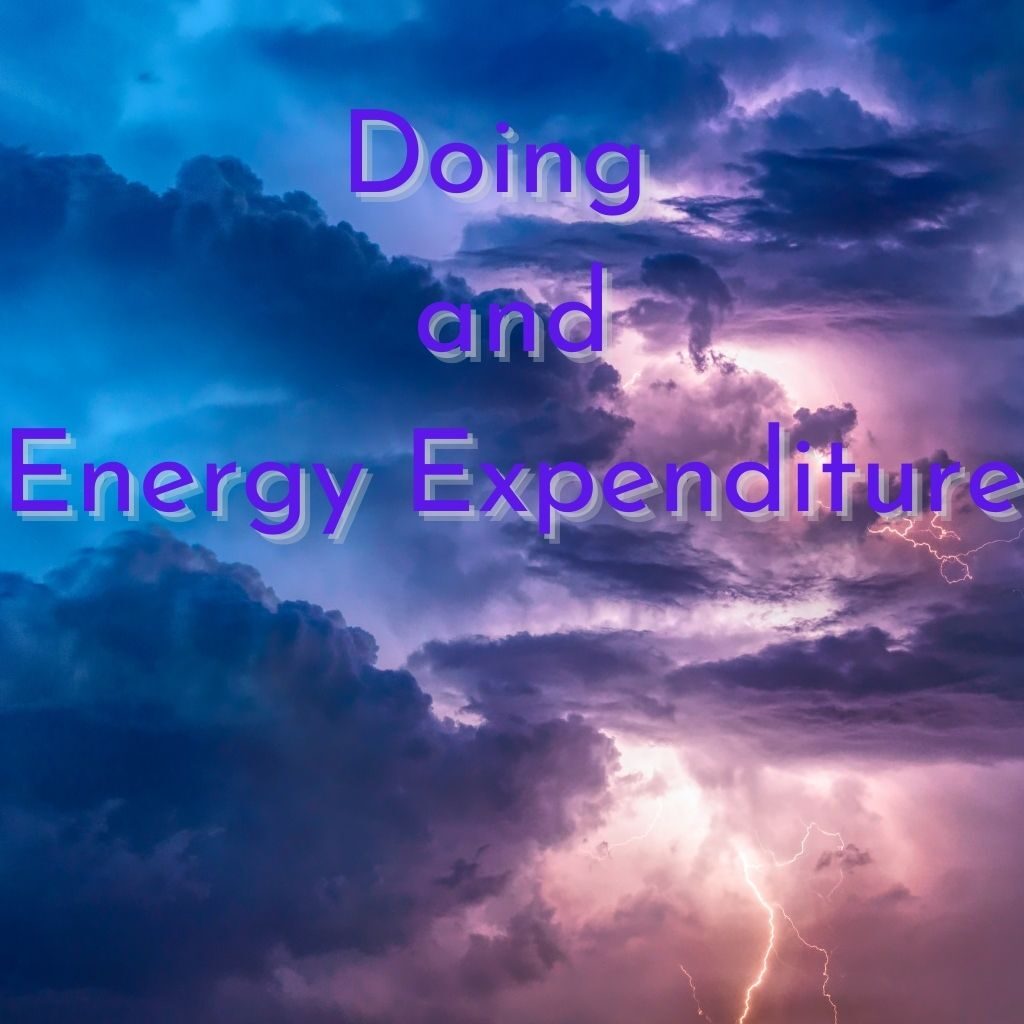 I learned a bit more about the concept of doing today.  The teacher gave a spectrum of examples of doing.

As you can see, on the one hand there is the expenditure of efforts at varying degrees, and then on the other hand, there is the influx of rewards also at varying volumes.  Last year, in my posts, I have talked about energy conservation and the idea of net profit in terms of energy.  How do we conduct ourselves in a way that the energy flow is efficient, that the inflow is more than the outflow?

I cannot say I have made much improvement in this area.  I still have an energy leakage problem, which is not the same as regular outflow, which is the intended and budgeted expenditure.  Leakage is unexpected.

I think the root cause of my leakage is low self-worth.  When I find myself compulsively and repeatedly trying to do something, expending more than the necessary amount of energy, it is usually related to doubting myself, doubting the quality of my work, doubting my competence, projecting and expecting all kinds of errors and problems to impede my progress and quality, fearing that I would fail to impress others, needing to impress (to get the acknowledgement and appreciation that I need), fearing that others would think lowly of me, etc., so there’s some anxiety, worry, and fear in my compulsive doing.

I think if I could remove the anxiety, worry, and fear as I go into the job, just do the job without the unnecessary psychological burden, I may be able to perform better with less efforts.

Below is an example of my doing, accounted for in terms of energy.

About a week ago, a couple of ping pong players at my condo approached me, almost out of the blue, to suggest that I join a ping pong club that they have been going to.  That was after I got mad at John 1.0.  The universe had read my mind that I didn’t want to play with him anymore! But I didn’t have anyone else who could match or adjust to my skill level (level 0) at the condo.  So I researched the club that she suggested, and it said I had to bring my own equipment.

I was unsure about how to buy a racquet, even though I had tried various ones at the games room, I still wasn’t sure which one to pick.  Then I thought I would ask the ping pong players for recommendation.  But for at least six or seven days, I didn’t see them.  Then I saw them this morning.  She gave me a couple of suggestions—some efforts required with both, plus waiting time.  For me it meant too much energy outflow only to exchange for poor results.

Later, I had lunch with NN and mentioned to him again that I needed a partner, and he asked me again about my 1.0 problem.  After that, he phoned LJ who played ping pong competitively.  LJ gave me different information than the ping pong players at my condo complex, but was a lot more forward in helping me.  He connected me with C who coached ping pong and sold racquets.

I talked to C, and learned a bit more about the equipment.  A couple hours later, I got myself a new racquet, delivered to me in a Porsche.  The timing was much faster than Amazon or any other online delivery could ever achieve.  Not only that, he helped me glue the rubber to the frame.  Then when he came to my condo, I took him to the games room, because he just happened to park at its entrance.  When he got in, he was impressed with the facility, though he said the ping pong table was a bit old.  I showed him some of the racquets that were at the games room, and he explained the difference between the professional one I bought and the ones at the games room.  Then we rallied a bit to test out my new racquet.  Seeing my skill level, he was able to recommend a trainer or training course for me at a certain location—no research effort required on my part.

The overall purchase experience was a lot better than what I could have gotten if I just bought it online, or if I went into a store.  Previously, 1.0 mentioned that he would buy a Butterfly racquet, and I said, “If you go, take me with you.”  But he never went.  Now that I got a Butterfly racquet, without him taking me, but with C delivering it to me, within an hour of order, almost as fast as ordering food delivery, but with extra instructions and explanations almost as if he was laying down all the cushions and carpet for me to move toward my next steps.  Small expenditure, immediate delivery, with bonus materials.

An upshift in vibrations from option 1.0 to option C.

As I review the extent of my doing in regards to switching my ping pong practice, I find that there is very little psychological burden when I talked to LJ and C.  So things moved really quickly.  However, between the moment I generated the thought of finding a replacement partner and the time I actually got all the equipment (including a pair of clean indoor shoes which was a headache in itself as buying shoes have been a challenge for me), there has been quite a bit of inactivity and inertness along the way, though no over-expenditure of energy.  And I still haven’t gotten to the point of finding a replacement yet.  So in terms of speed of progress, it’s not great.  But this delay seems to be caused by my hesitation, whether I really should walk away from 1.0 or not, and if I do, shouldn’t it be out of joy instead of grief?

The teacher did not explain doing in terms of energy expenditure, rather, in terms of state of mind—whether you’re doing something with joy, hence a state of lightness and ease; or you’re in the flow as you do something, which is another type of lightness and ease; or you’re doing something because you have to, then there is a bit of heaviness with the process.

I think this is a nice lesson in learning about adjusting the activities of the internal world, to optimize the results of the external world.