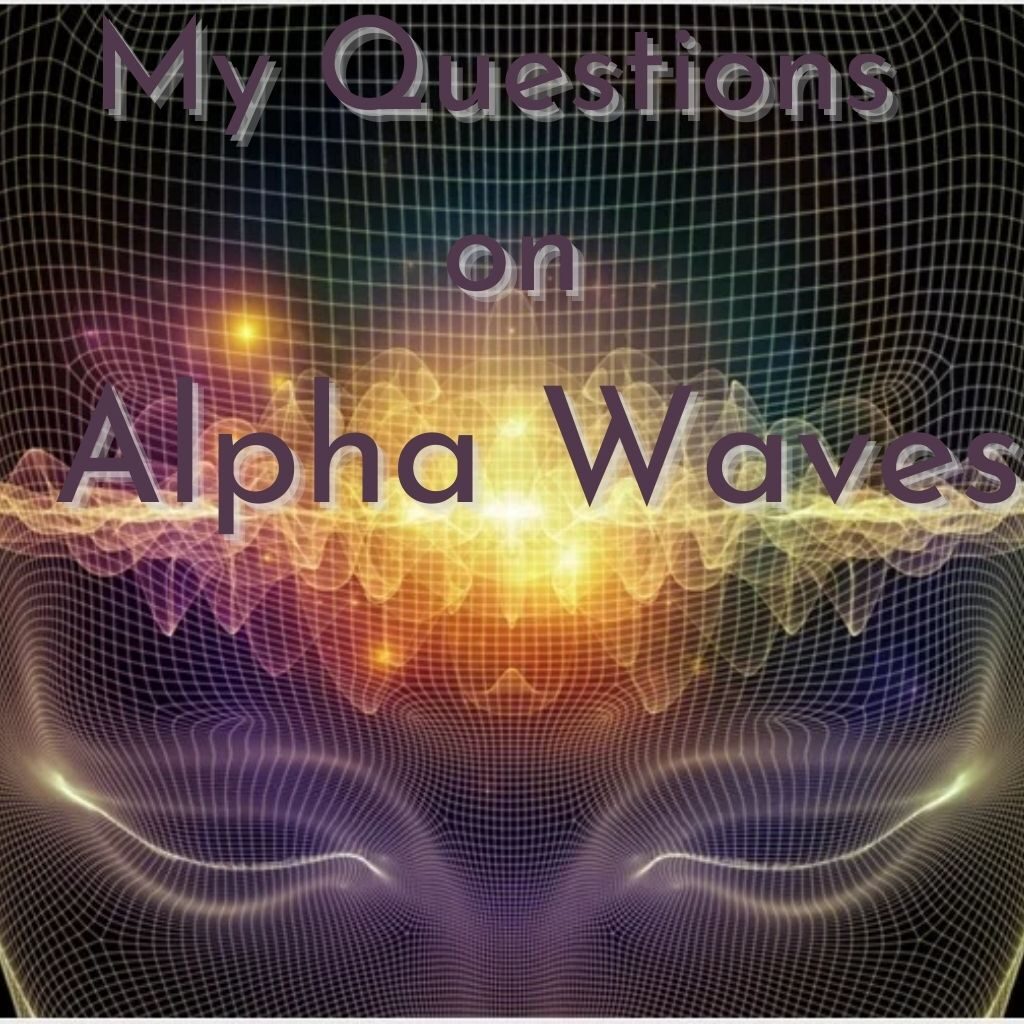 My Questions on Alpha Waves

One component of my course about growth and healing talks about alpha waves meditation.  The teacher talked and wrote extensively about alpha waves which I found to be quite intriguing.  Out of curiosity, I asked four questions on this topic.  She answered three.

My first question was about sensory cues.  Her guided meditation usually came with very vivid images of nature.  But when I tried to meditate, the first or second thing that came to me was not an image.  Rather, it would most likely be a smell, taste, sound, etc., such as the smell of magnolia, the taste of a cup of hot chocolate that I once had at a premium chocolate shop, the melody of a song coming on in my head, etc.  So I asked if the emergence of any of these sense stimuli is a connection to life energy (connection to alpha waves is a connection to the energy of the universe).

She answered that there were two parts.  Firstly, depending on our natal chart, some people were born to have more developed senses of touch, smell, taste, sound, rather than sight.  Secondly, the sense stimuli that I connected with when I tuned inward could be but might not entirely be a connection to the energy of the universe.  It depends on the depth and strength of the connection.  If I was only momentarily feeling a certain stimulus, then that would not be considered a connection.  However, if I was merging with the vibe of the stimuli, then that would be a connection.

I think, indirectly, I am understanding her meaning of tuning in to alpha waves and to the cosmos.  I think the key word is merging with rather than connecting to that range of vibration.

My second question was about feeling the vibe of a particular situation, person, soul, etc., which touches me, comforts me, assures me, nourishes me, strengthens me, etc.  It’s the equivalent of having a support network that holds you when you need it, except my experience occurs in non-physicality.  So I asked if this type of feeling is a connection to universal energy.

Her answer was that it depended on the intensity of the emotional connection.  There are many levels and nuances of feeling touched and feeling grateful.  The experience of being touched could be a simple joy.  Or it could be being immensely touched by the magnificence and grandness of life when we witness and experience the larger force at work behind us and we surrender to the sublimity of the soul.

So every emotion has its nuances.  Each nuance has a different meaning and depth, and therefore different energy and vibration.

She emphasized the key is to experience whatever level of connection we have, without trying to achieve a certain level or a certain image or a certain result.  So the emphasis is on flow, not on control.  The purpose of my question is not to so much to control, but to understand enough so that I can be creative and innovative in allowing my meditation to evolve in whatever way it chooses to, while still having the assurance that I am indeed doing the alpha waves meditation, instead of perhaps daydreaming or dissociating, etc.  Because she had mentioned before that some students were not able to go into alpha waves, not able to meditate, that they would instead have to do emotional release or other types of exercises before they could do alpha waves meditation.  As a result, I need a more definitive explanation and description of this type of meditation before I can determine whether I am on the right path or whether I need to do something else.

Despite her previous extensive explanation on this topic, she didn’t touch on anything close to my questions, so from my perspective her lecture is still inadequate.

My third question was about the possibility of momentary and spontaneous connection to alpha waves and the cosmos.  She said, “Yes, absolutely possible!”  She asked her students to dance, to laugh, to grieve, etc., and to switch to alpha waves, instantly.  The key to instant switch is to tune in to the breath, to follow the breath, without controlling it.  Just follow each inhalation and exhalation.  Immediately that would shift you from beta to alpha.

In that case, I am doing it quite profusely, frequently, and mindlessly!

I don’t exactly follow my breath consciously.  I somehow ride on it unconsciously, as if the breath itself is the horse-rider and the mind is the horse.  The body (the breathing) rides on the mind. And in the process, they merge and become one. But there are also lots of time when my mind goes on an ego-thinking path, which is a disengagement from the body.

However, when I do place conscious attention on my breathing, I am not feeling or following each inhalation and exhalation, rather, I am noticing the quality of each breath.  Sometimes it is heavier.  Usually inhalation is harder work than exhalation, while the latter is usually longer, and is usually accompanied by a sense of relief.  The inhalation is more of a struggle as in there is a lot of tension and tightness in the body, so the body exerts more effort to move the air in.  And there are times when the lapse between exhalation and inhalation is a bit prolonged, as if I have forgotten to breath in, and that’s when I would consciously tune in, momentarily, to do the inhalation.

So when the teacher talked about following the breath to connect to alpha waves, I don’t really feel that I have connected to anything special.  I was expecting something unusual, like something that I had never done and had to learn and practice doing.  But it seemed like I am coming from the opposite direction, and hence her instruction to me is inapplicable.

When I said to the teacher that my mind had a tendency to fly all over the place, she said, it’s not really flying, it’s a connection to the different parts of the universe where there is no boundary, no limit in time and space, so I could be floating around in different universes.  In alpha waves, I go to the future, to a past life, to another civilization, to the fifth dimension, etc.  Total freedom!

I think her answers clarified not so much what alpha waves connection is like, but who I am and what I have been doing.

You might think, if someone is in alpha waves, she should know that she is.  I think that is generally true.  But for me, because it is presenting itself like some kind of an exotic lesson, as if I don’t already know it, so in the process of trying to learn it, I become extremely confused.  It’s like a fish does not know what water is, and you’re explaining to her what it is. Perhaps this is true of most life lessons. You already know the answer. You just need a little reminder.