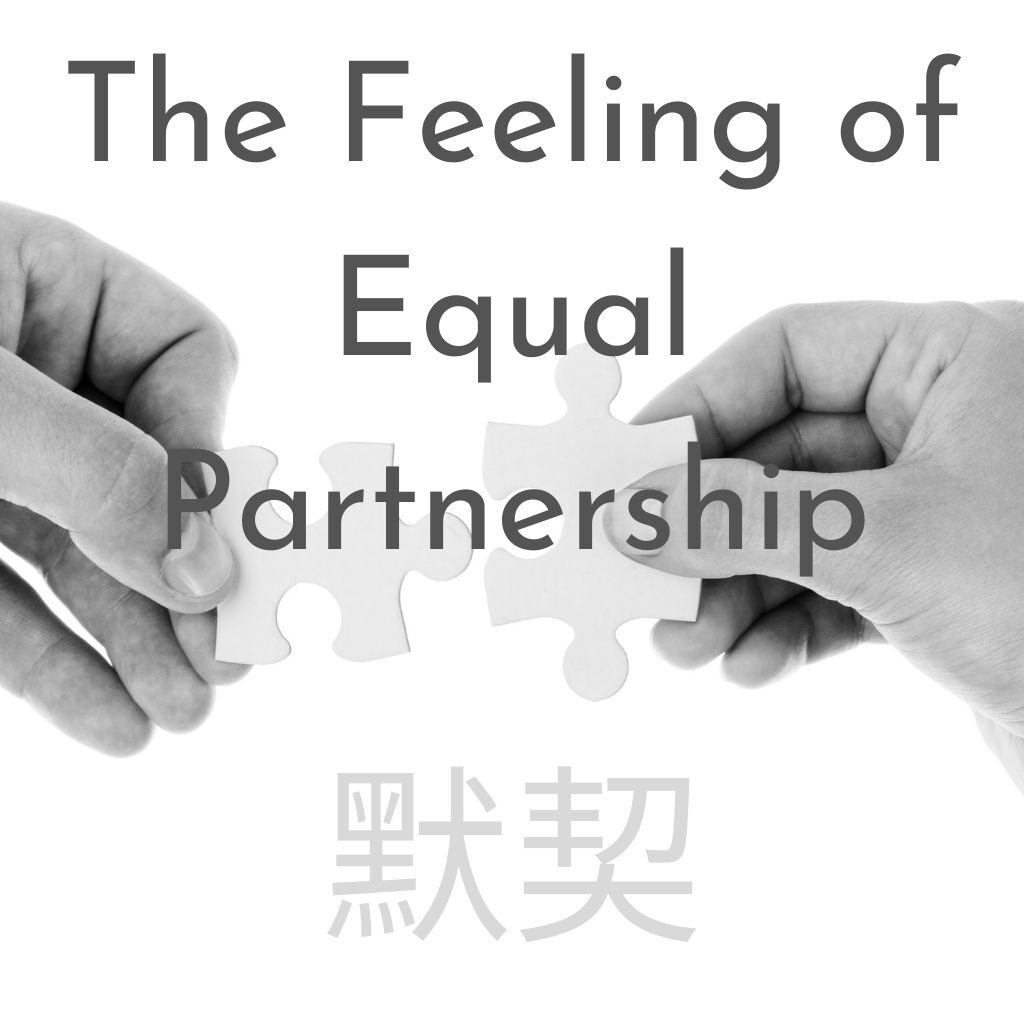 The Feeling of Equal Partnership

Last week, I told a friend that living with Patricia felt like a sort of partnership.  He said, “Well, isn’t that how it’s supposed to be?”

In the past when I lived with my parents, my father would expect me to have dinner ready when he came home from work.  It was not equal partnership, but duty and service.  He expected me to serve him, since he was so exhausted and hungry by the time he came home that he thought it was only right for me to have food ready for him, since I was living under his roof using his money.  If I didn’t do that, or if the food was not to his satisfaction, he would roar at me.

So this was my neurological conditioning of a woman’s role in a marriage—cook and clean, like a free slave.  It wasn’t just a constant negative feedback, but a one-way relationship where he considered himself to have the right to be endlessly abusive to me and he gave me no other choice but to silently receive his emotional outrage.  It’s not discipline.  It’s indignity and disrespect.  Yet, in his mind, he felt it was absolutely justifiable to crush my self-esteem however much he liked, and I was not allowed to retaliate, to protect myself, or to avoid the attack.  He would not allow me to go away without being crushed.  I think I treat a rotten apple much better than he treated me. But that’s his idea of his love for me, in that he sacrificed so much of himself so that I could have a life, so in return, he could treat me however he liked.

Although my father did not explicitly treat or see me as a slave, the dynamic between us was exactly that between a master and a servant.

So when I was suddenly yanked out of my home one Saturday morning to go live with Patricia, I felt my life turned upside down, and everything after was a huge psychological adjustment, though not a bad one.  On the night of arrival at her city, she took us to a grocery store to buy food for the next couple of days.

Inside the grocery store, we took turns to push the shopping carts.  We discussed in the produce section what we wanted to cook and eat, and we went to the cold foods section to get milk, juice, etc.  She didn’t eat carbs, but only meat and vegetables, and that was fine with me, though my usual diet was mostly carbs and vegetables, with very little meat. We discovered each other’s preferences and lifestyles in the process. Along with that, there were acceptance, understanding, respect, and a mutual effort to find common ground, to compromise, to fit.

The whole process at the store felt like the dynamic between husband and wife.  There was no hierarchy in the dynamic.  Something that was shockingly refreshing for me.

At the checkout, she paid for the food because my credit card was shut down a couple days prior to her shipping me to her city, and I didn’t have enough cash. Her gesture felt like a husband providing for a wife, and I felt that it was lovingly warm and touching.

At home, she would put away the foods, and I would help out as best as I could although I didn’t know where she put her things.  When it’s time to cook, she would head to her kitchen, and I would take that as a cue to follow her to the kitchen and see how I could assist.  She didn’t give instructions, unlike my parents who gave commands.  But I picked up quite quickly so we partnered well.

From preparation to cooking to setting table to eating to washing dishes to putting dishes away, she didn’t give any instructions, nor did she expect, require, or demand my participation.  Even when she came home from work dead tired, she would not expect me to put food on the table for her. There was simply no expectation. It was entirely up to me how much I wished to participate and contribute.

Sometimes she would get up early to cook breakfast for me, before I arrived at the dining table. It was almost like she wanted to serve me. Though I quickly intercepted the process by doing whatever else needed to be done, whatever little things like setting the table, pouring juice and milk, boiling water for lemon and honey, cleaning the countertop, etc., while she was still in the kitchen preparing the meal.

I quickly carved out a supporting role for myself.  This part wasn’t exactly equal partnership, but I would say we both found a role that we were comfortable with. And I appreciated the fact that she allowed me to play whatever part I wished to play, and in the process, we also discussed our preferences.  So there was a high level of freedom in how to engage, and how much to engage. The dynamic was shapelessly creative and fluid in that I quickly became her third hand, moving around her to support instead of to disrupt, therefore being very intimately involved in and in sync with her rhythm.

It’s interesting how we interacted without much verbal communication.  It was very tacit! I was trained to be on alert, to act quickly to preempt my father’s roaring, so explicit communication is not necessary for me to team up with anyone, though I still perform better with open communication.

Everything else we did–cleaning the house, doing laundry, watching tv, washing the pillow covers, etc.–was done in the spirit of equal partnership, in the sense that we would discuss what we wanted to do, how to do them, or otherwise, she would start the chore and I would come up behind her to assist.  And if I saw something that needed to be done but didn’t know how she did them, I would ask.

Although she invited me over as a guest, a friend, I experienced my role in her home to be more like a husband or wife, sometimes a pet, but presumably never a pest.  So it was a delightfully refreshing experience that left me immensely grateful, as now I finally have conscious clarity as to what equal partnership feels like, therefore more able to manifest that in my life.

In hindsight, my birthday week was nothing short of a miracle tightly bundled with transformative surprises!