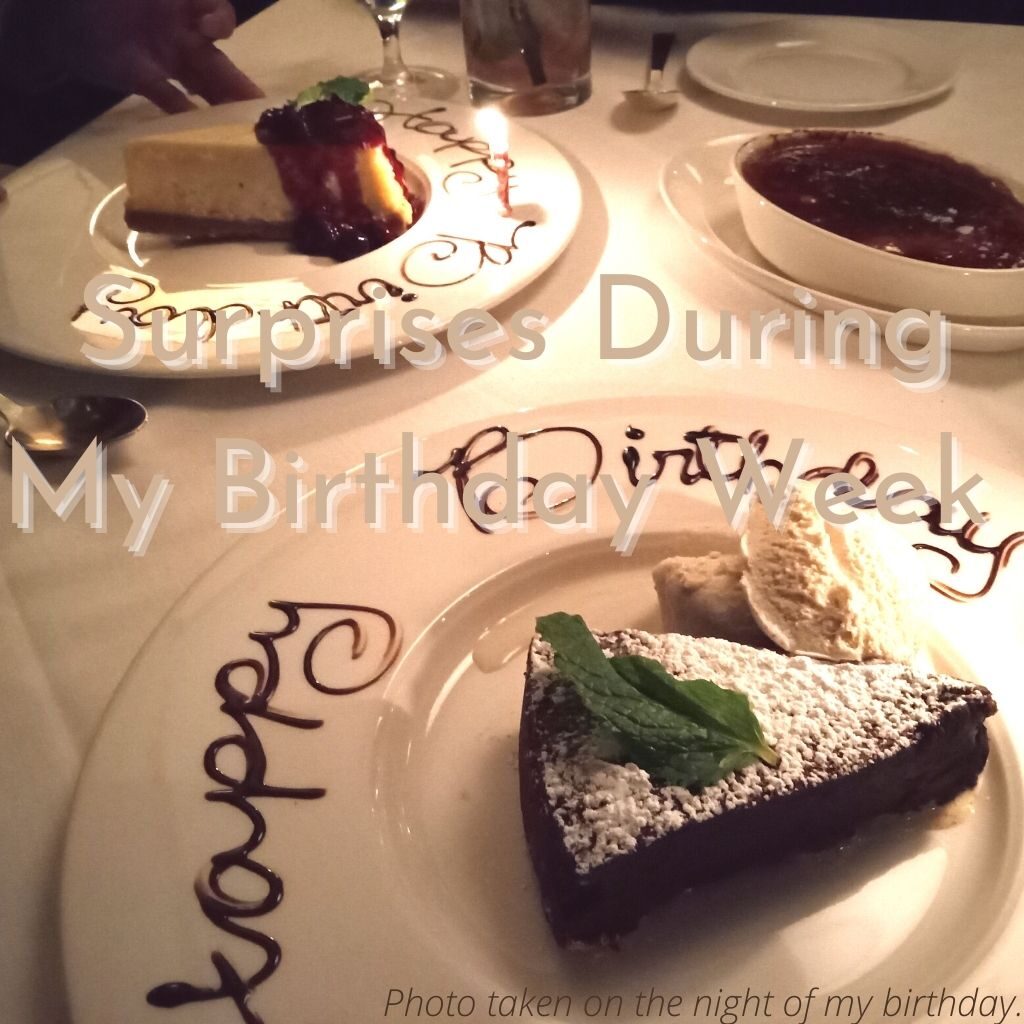 Surprises During My Birthday Week

There are a few things about my birthday week last week that deeply touched and surprised me.

For the past few months, I have been trying to manifest companionship, relationship, and connection.  Then I stopped around the full moon of February, one month before my birthday.  I had been using Moon Moon for years to manifest and to release, but I stopped, because I was extremely dissatisfied with my manifestations in the last few months, which meant something had to change.

However, what I did ask Moon Moon to do for the February full moon and the subsequent few days was to help me return to the center, to stop swinging.  The lunar energy is good for augmenting certain energies that you desire and for releasing those that you don’t desire.  Instead of asking the moon to push me higher toward the energies I wanted, I asked it to go the other way–to release the thing that made me swing higher, or in other words, to release the energies that generated my desires, and vice versa.  The effect was astonishing, and in that sense, it was tremendously valuable for my growth and learning.

Without asking it to manifest an external outcome for me, the outcome didn’t materialize, so there was a bit of sadness and disappointment, but that was a blessing in disguise as a lot of the positive energies that previously went into the swing were released, and so I felt a flood of euphoria even though I didn’t get what I desired.

So with my new way of using the moon, I became more stable, as I minimized my swing.

Then as my birthday was approaching, I asked myself, ‘What do I want to do?  What do I wish to do on my birthday?  Who do I want to spend it with?’  But I refrained from making a wish.  I did feel somewhat insecure about not trying to intervene, as I was afraid I might end up lonely and overlooked.  But with the guidance of the teacher Jian Xiang Ting, I learned to manage and heal my insecurities while exposing myself to a possibility of lack, of having no one to celebrate my birthday with, of having no one beside me.

Then the week before my birthday week, there was a surprise.  Then when the birthday week came, my life temporarily turned upside, which was actually a blessing in disguise.  Then on the actual day of my birthday, even more surprises!

It’s not something you can envision in a conventional birthday celebration.  It was more like a series of lovely coincidences that left me awestruck, amazed, and deeply touched, as it felt more like a sequence of events orchestrated by the universe, and only could be done so by the universe, because it appeared so random and unplanned, yet everything fell so perfectly and effortlessly into place!

I told a friend about the John 1.0, John 2.0, and John 3.0 (each is an upgrade from the previous version) in my life lately.  I only spent a brief period of time with 3.0 during my birthday week, and he didn’t know that it was my birthday on the day that he served me clam sushi omakase style at Patricia’s house.  Yet, I thoroughly enjoyed watching him sliced and torched the sushi, and enjoyed trying the clam with different sauces. He really had skills!

I had been wanting to eat Japanese food lately.  Every time people asked me to choose a restaurant, I would suggest a Japanese one.  So the appearance of a personal Japanese chef on my birthday was itself an arrangement that only the universe could orchestrate.  And only the best–omakase style!  But there was a little twist to the style, in that it was not a selection of sushi, but a selection of sauces!  That was perfect though as I had just returned from a luxurious steak dinner.

I find that omakase style is not just about the fine food, but also the fine company of the chef.  I enjoyed conversing with 3.0 about sushi, and was fascinated by his passion and knowledge about Japanese cuisine.  He was not only knowledgeable about ordinary Japanese food, but the high-end ones.  So talking to him was an unexpected culinary and cultural elevation for me! I was deeply touched by his presence!

There is something deeply touching about 3.0.  Even though I had only spent a few days with him during my birthday week, I found that his taste in music and food and a few other things was refreshingly appealing.

In fact, all three Johns are exquisite in their own ways.  I am attracted to each, not to the person but to the energy of refinement, but the third one seems closer to me in terms of understanding and compatibility.  So at a higher level, my experience with them tells me more about myself, as to what I am drawn to.

The other thing that I found really touching about my birthday week was that I had someone to take care of me, to provide for me, to keep me company, to share a life with, etc.  Companionship.  It was a bit like living in Terrace House, the Japanese reality show that I liked.

I hardly ever share the same living space with another individual except my parents and relatives, which I found very suffocating.  But in the past month, I had shared the same living space briefly with the guy upstairs, and with Patricia and 3.0.  It was a totally refreshing experience that left me craving for more of it!  What a big change!

Nowadays, I try to refrain myself from making wishes.  I’m not suggesting that you don’t make any wishes; only that you be conscious of the energy behind your wish. I know that if I had wished or intended how my birthday to turn out, it would most likely not present me with all those surprises, which then limited me to only what I knew instead of what was possible. Without making a wish or plan, I opened up myself to the maximum and best possible outcome!