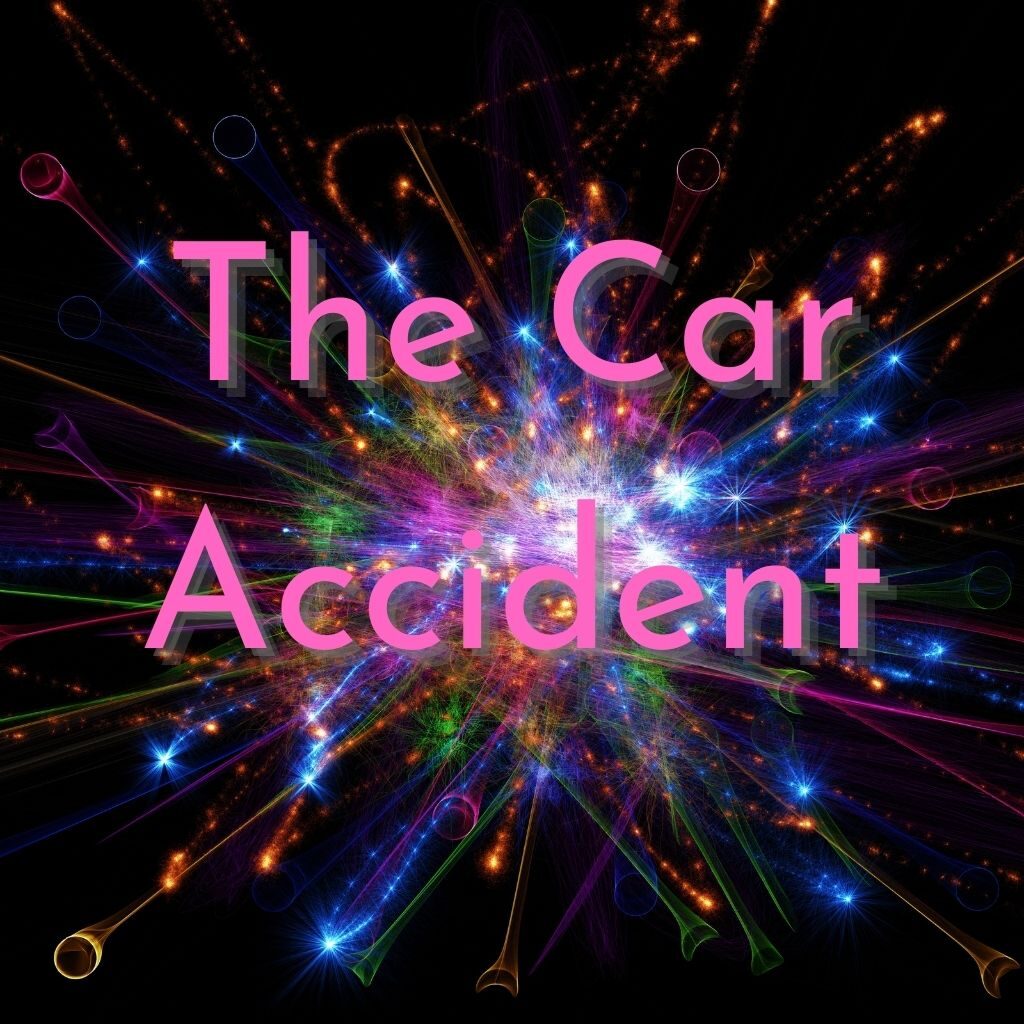 The car in front of us was perhaps 20 meters away.  It didn’t move.  Neither did we.  Patricia was checking her phone for the location of the art gallery.  A car on her left lane drove past her, which she took as a cue that she was able to move too, so she stepped on the gas pedal while still checking her phone without lifting her head to look at the traffic in front of her.

I grabbed her right arm.  She didn’t respond.  I said, “Oh no no no, stop.”  She still didn’t respond.  Our car continued to accelerate forward.  In that brief moment, I watched our car moving toward a stopped car, I thought, ‘Oh we will have to crash.  There’s just no time to stop now.’

In the very last instance, she lifted up her head slowly, then stepped on the brake.  But the car already crashed.

She immediately got out of the car, while I was still sitting inside, thinking, ‘Why didn’t she give me her attention when I grabbed her arm?  Why didn’t she listen to me when I told her to stop?  Why didn’t she allow others to interrupt her while she always interrupted others?’

I believed I gave her more than enough time to listen to me, she simply chose not to.  Later when she talked about it, she said, “I had no time to stop.”

I didn’t argue with her.

I was pissed that she chose to treat me as invisible, insignificant, inconvenient, etc., that when I gently asked for her attention, she totally ignored me, as if I was not there at all.

However, I did not express my anger, because she claimed the center of attention, now that she got into an accident.  Again, my existence and my emotion were relegated to an insignificant position as we had to take care of her.

When both parties were talking at the scene of the accident, I stepped forward to ask if the other parties were okay, but they didn’t say much to me, instead, they immediately focused on Patricia.  I had no idea why.  It was as if the universe was trying to tell me that this was none of my business, that I should step back.  So I did.  And let Patricia took center stage.

Later, her boyfriend appeared out of nowhere and stood behind me.  When I turned around and saw him, I actually thought that it was a pre-arranged meeting.  But no, he said he was just driving by and sawme, so then he pulled over and got out of his truck.

When Patricia finally turned around and saw him, it was like a godsend that he showed up at the moment that she needed him most.

He was very emotionally supportive.  The contrast made me I realize I didn’t do much to support her.  That made me feel guilty.

She was rather disoriented and gloomy the rest of the evening, and continued to be so the next morning.  We went to the police station around noon.  The whole kerfuffle took longer than necessary, because she was not communicating effectively with the police officer.  He said A and she heard B, he asked C and she answered D.  I absolutely couldn’t stand it!  I intervened a few times.

When she was given a form to write a police statement, I offered to write it for her, because I was afraid that if she were to do it, we would have to wait until the cows come home.  But the problem with me holding the pen was, she kept interrupting, asking, “What are you writing?  What is that sentence saying?”  She asked me why I wrote every single word.  My train of thought was repeatedly broken.  Every step of the way, she tried to work against me!  Oh my fucking god!

This is so far away from my style of handling things.  My style is to aim only and directly at the goal, and shoot.  Everything else is out of focus.  Her style is to focus on all the noise and place them between me and the goal.

I was about to explode.

But I held back the explosion, and opened up space for her to provide valuable input.  When I discussed with her what I intended to write, she didn’t provide clear guidance on how she wanted to proceed, she only said how she felt and thought, which I said, “If you write it that way, you’re simply implying that you were not looking in front of you when you stepped on the gas pedal.”  Even though that was indeed true, I didn’t want to paint her in that light.  I was trying to act in her best interests.  But I realized I shouldn’t.

If someone wants to fall into the abyss, just let them.

By the time I finished writing, I was psychologically near boiling point.  She phoned her boyfriend and read the statement I wrote to him, as if my writing needed his approval.  What an insult!

When we were about to submit the statement to the police officer, she asked, “Do you want some water?”

“Just finish it off!  We have wasted more than enough time here already!”

She didn’t say anything.  If she did, my anger would have burst forth at full throttle.  But since she didn’t, I released some of my anger in time to continue with the rest of the kerfuffle.

In hindsight, I realized there was at least one lesson in there for me.

I also realized that Patricia was actually very near melting point, but because of my presence, she appeared stable.  I was aware that I was holding space for her, such that I did not have to do anything but simply be present and she would be okay.  But this created the illusion, for myself at least, that I did not do enough or better to support her, while her boyfriend did and said so much to her.  And that contrast gave me guilt.

When I physically left her, her mood changed.

If I understand it correctly, I was holding space because I did not have the vibration for her kind of drama in my fields.  So when she was with me, she could not act out her drama, because it would be vibrationally dissonant.

The accident helped me understand more about the nature of mass events, as well as why I was involved in them.  Even though the event was at the expense of Patricia, I gained a lot from it.