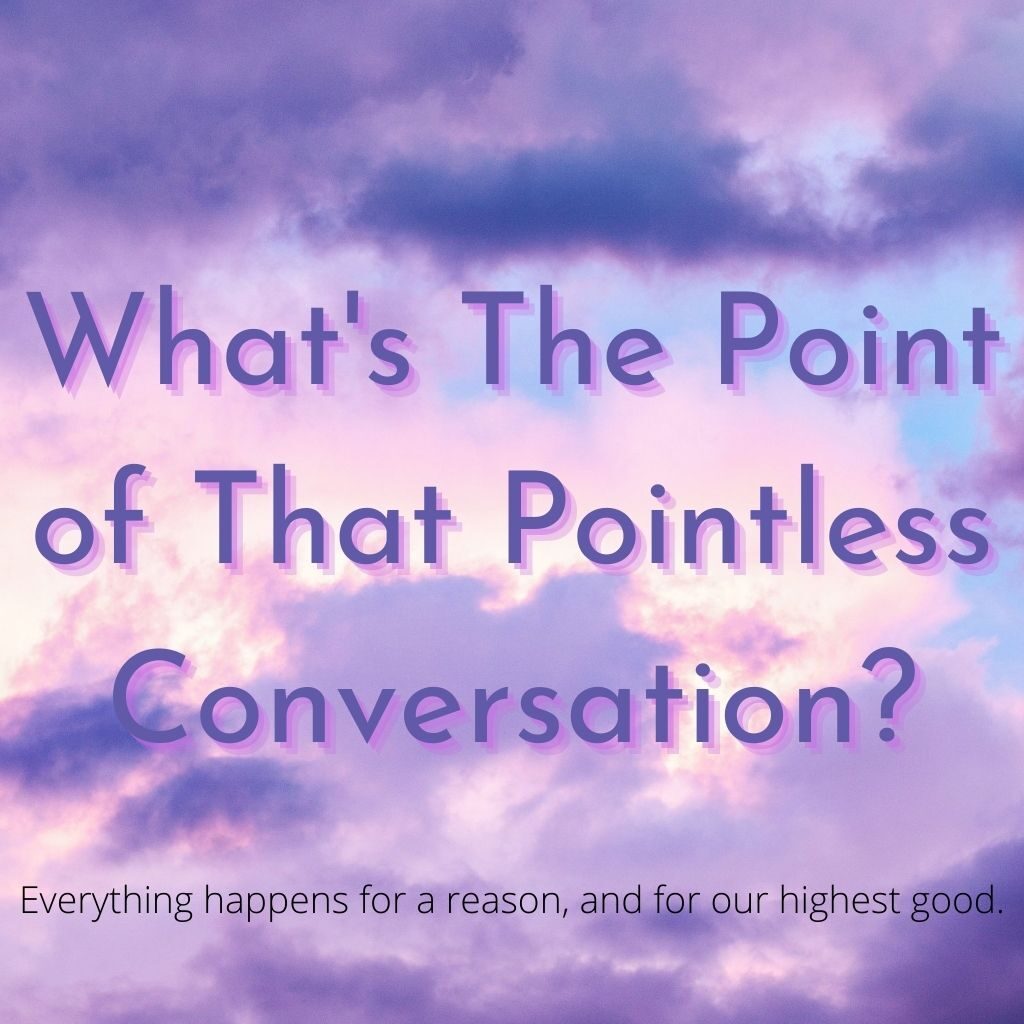 What’s The Point of That Pointless Conversation?

‘Wow!  A foreign scent!’  That was the thought that came to my mind as I opened Car Car’s door after the dealership had replaced its tires.

I had magnolia scented sachets inside Car Car, and normally, it would be infused with a faint scent of magnolia.  However, when I opened its door this afternoon, I detected a scent that I did not recognize.  I sank into the driver’s seat.  The scent continued to greet my sensory system.  It’s a men’s cologne.  And this man had shorter legs, because he adjusted my seat forward, and put one mile on my odometer.

As I was driving away from the dealership, I continued to mull over this guy who infused his scent in Car Car, almost like a territorial claim.  How much cologne did he have to wear in order for it to leave such a long olfactory trail?

Later, when I went to buy a ceramic pot and came back to open Car Car’s passenger side door, again, that foreign scent bombarded my nose!  Wow, it was still lingering even after I turned on the outside air intake.

That was the more pleasant part of today’s visit at the dealership.  There was however a not-so-pleasant part which was a lesson in disguise.

Back in November, the dealership told me that my suspension, plus other things, needed to be replaced.  I decided to postpone the suspension repair.  I was however interested in fixing a more hazardous problem—rear main seal leakage.  It turned out that I never did, because a few things didn’t happen when I wanted them to happen.  Now that I look back, I wondered if I was blocking them from happening then.  And now I opened up certain things within me, there was clearance in physicality to make that happen.

So that rear main seal leakage is generally a non-issue right now, but the suspension is.  The dealership said the parts were obsolete.  They tried different suppliers, but none carried the parts I needed.

First, I handled the situation intellectually, saying, ‘Okay, so you’re saying that it needs to be fixed but you cannot find the parts to fix it, that means I am not going to do anything about it right?’

My question did not succeed in eliciting a solution from her, rather, she suggested that I trade the car in, and I knew that it would not have any monetary value, so that suggestion was useless to begin with, but seeing that she posed the useless suggestion twice, I confronted it directly:  “If I trade it in, how much would it be worth?”

“It’s not going to be worth anything.”

This conversation was pointless!

She kept telling me that my car was too old, that the parts were obsolete, and most importantly, she kept emphasizing that it was “clearly unsafe” to drive.

I had very strong reaction to her opinion, to the words “clearly unsafe”, and to her suggestion of dumping Car Car.

Somewhere in my abdomen, I felt an energetic tightness, like a wall.  When she verbally squashed Car Car to the ground, her words crashed against my wall.  I felt her words kept trying to blast through, and of course I held my ground, so I had physical sensations too, like an electrifying feeling coursing through me, cold sweats bursting through my skin, coupled with breathing difficulty as I tried to hold my breath each time she tried to blast through.

Interestingly, I only felt reactions at the physical level, almost nothing at the emotional level, and I did not feel the need to be verbally defensive or to react like a traumatized person.  Rather, I just let her talk while I cognitively registered this problem she posed for me—the person who gave me a problem was the person who was supposed to solve my problem, and yet, she magnified it into a much bigger problem, so I couldn’t help but spin in my mind, wondering what the hell was I dealing with?

Instead of staying stuck at the intellectual level, I switched into my psychological space to check if it was safe for me to open up my wall to allow her words to permeate through me (and past me).  I think the key points are boundary and belief.  A wall is not a boundary.  Instead of using a wall as a defense mechanism against any experience I don’t want, I can try to establish a belief instead.

I want to combine this topic with the infection rate of Omicron or whatever other variants of the coronavirus.  The way I sense infection rate is the energetic permeability of the news first at the mental level.  When the media keeps broadcasting about another variant lingering around, about it being wide spread, about whatever else that has a negative impact on people’s mind, and those people accepted the news, then at the mental level, the barrier is already broken.  At the mental level, the virus has already entered their reality.

In other words, at the psychological level, the vaccine loses its barrier effect and hence increases the transmissibility of the virus the moment someone accepts the idea that he is at risk.  More specifically, his mind is opening up to possibly letting the virus in.  Each time he hears the news, his door opens wider.  Although, he always has the option to keep his door shut tightly, with or without the vaccine—this is a question of personal empowerment.  He either believes in himself, or he believes that he is a victim of the virus.

Everything in physicality originates from the nonphysical level.  This applies to the barrier effect of the vaccine as well.  The barrier must first be set at the mental, emotional, and spiritual layers, before it can take effect at the physical (cellular) level which we term immunity.  I want to emphasize a point:  the human body has tremendous power, potentials, and ability.  The power we have will by far supersede that of any pharmaceutical companies. If you still fear that there is risk, you can set an overarching belief on top of your other beliefs, as a protective layer; beliefs can be structured in a hierarchical fashion or in any organization.

Going back to my car problem, when she kept devaluing Car Car, I held my wall.  I did not let it crumble down.  But I wonder if I could have met the foreign invasion differently.  Say, if I had a belief saying that Car Car would live to a ripe old age healthily with all its needs conveniently provided for, would she actually still say all those things to me?  Or would she have said something completely different?

I think the pointless conversation today actually had quite a lot of takeaways. And I understood that my postponement on the suspension repair had manifested the obsolete parts.