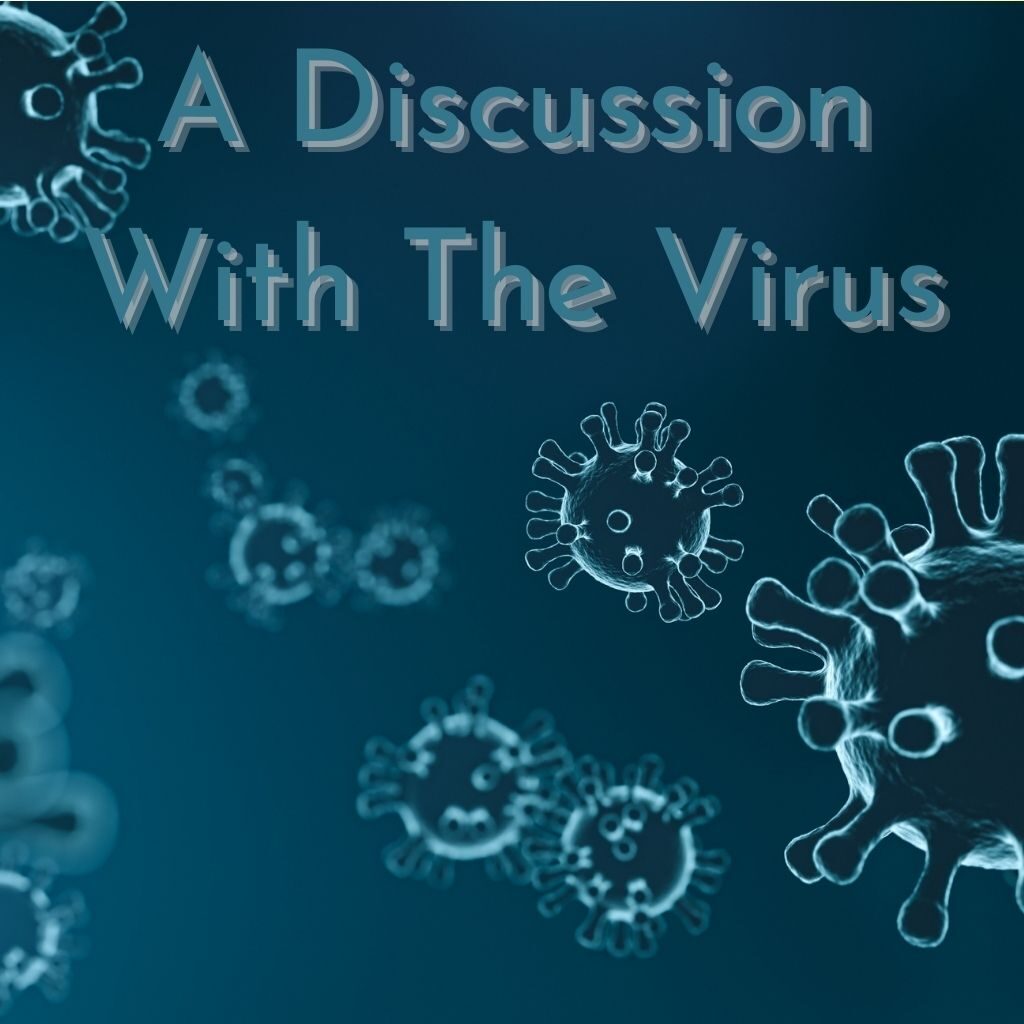 A Discussion With The Virus

As the noise of the pandemic continues to pervade the atmosphere around the world, I contemplate on the purpose and value of viruses in general.  What is the metaphysical meaning and benefit of a virus?

I was being a bit of a tyrant, wanting it to stop spreading, stop existing, stop killing.  Immediately, I came to understand that I shouldn’t dictate and override its mission.  Respect for all consciousnesses.  If it exists, that means it has the right to exist.

So my next question is, what is it doing?  What is the value of its existence?

I was never infected with coronavirus, nor am I vaccinated.  I generally don’t get flu, and don’t get flu shots either.  It’s just not my thing.  My body has its own agenda, separate from whatever agenda is in vogue at the moment.

I do get flu-like symptoms. Weird and intense.  But it usually coincides with something else that’s happening to my body, like menstruation, healing, or over-exhaustion.  So its timing does not coincide with flu seasons or with coronavirus waves, but instead coincides with what my body is going through.

My flu-like symptoms are mostly ways that my body tries to flush out something.  It can be fever.  It can be runny nose, sneezing, coughing, impaired sense of taste, etc.  Sometimes I end up with a sore throat and a coarse voice.  Other times I end up with swollen and red eyes, looking more like a gold fish, as thick fluids continually drained out of my eyes for several days.

Usually I can negotiate with my body about the less severe symptoms.  For example, if I have to cough in a public place nowadays with the pandemic going on, I don’t want to appear as if I am infected with the virus, so I tell my body not to cough until I am out of the public area.  In other words, to some extent, my symptoms are manageable.

So from this angle, I look at the coronavirus and viruses in general.  Do they exist for the purpose of cleansing and purging our body?  Because they can only exist in a host body, although we see them in a negative light, as if they are parasitic, but maybe they are symbiotic?  I know some hosts die from extreme reactions to the virus, but could it be that the cleansing work is too drastic that the hosts do not have the strength to go through with it?  I imagine that the coronavirus might be some little janitors who selectively enter hosts that need extensive cleansing.  My Egyptian friend said that he has been infected a few times, without hospitalization.  But I wonder about why some people come out of the infection not fully recovered, but become permanently impaired with some health problems.  Unless the virus is trying to clear some chronic filth, and since it is chronic, the host keeps regenerating the filth, and between the two—host and virus—an exit is needed from the loop so that the host can at least partially recover (sounds like the virus isn’t very robust in its programming).  It’s like a janitor going to a house where the inhabitants like to pee on the bathroom floor instead of into the toilet; and as a way for the janitor to finish his job, he dismantles the toilet entirely, not out of ill will but more so to make a point, a point that desperately needed to be voiced, causing a permanent illness in the house before leaving.  But strictly speaking, that illness is not actually a problem originated by the janitor, it is something that the inhabitants are building up to, the janitor only expedites the process.  This is only my conjecture, and is only for amusement purposes only.

From a different angle, I come from an ancestral line where we could not afford to get sick, regardless of hygiene level in our habitat or nutritional content in our diet.  Instead of paying attention to the wellbeing of our body, we redirected 100% of our energies toward survival.  I wonder if this would have anything to do with my unfriendliness with the coronavirus.  I don’t welcome it into my life at all.  I don’t believe in it.  I don’t want it.  I don’t need it.  And hence it cannot come into me.

This is not the same as saying that I am invincible. The human body is designed to host viruses.  The biological foundation of my body is also designed to allow the permeability of viruses, conditional upon my consent.  If I close my door to it because I want to divert my energies toward other things, we cannot cooperate and collaborate.  We go our separate ways.

Once, I made the mistake of negotiating with the virus on the restrictiveness of the proof of vaccination requirement.  It said, “That has nothing to do with us.  You should talk to the policy makers.”  It was then that I realized, my problem was not with the virus, but with the pandemic.