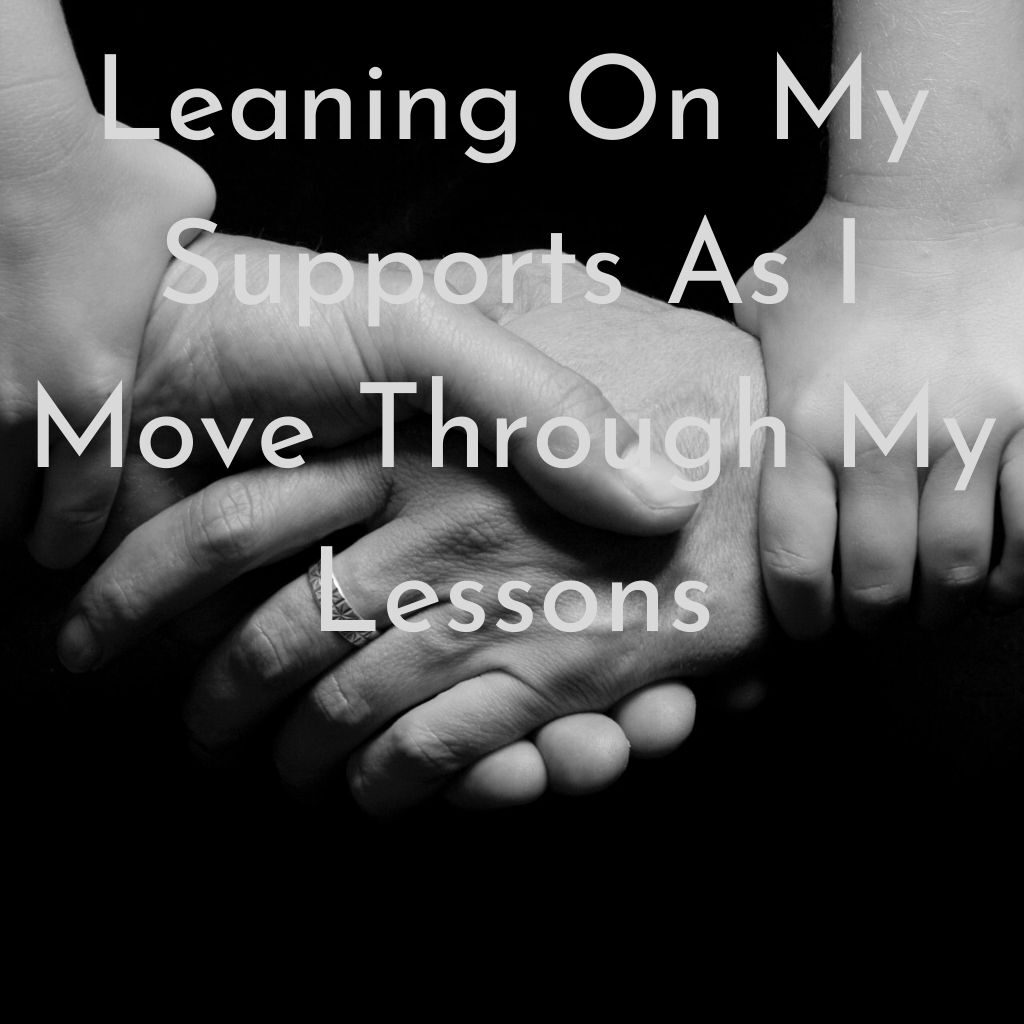 Leaning On My Supports As I Move Through My Lessons

Today, while doing random things without having a structured plan for the day, I intuitively started to write in my journal of miscellaneous thoughts that passed through me.

First note was an observation of my current relationship with my deceased mother.  I don’t contact her when I am doing well.  I only contact her when I am in need.  This is the opposite of the Chinese saying 报喜不报忧 which loosely translates to mean reporting only the good news and not the bad ones.  In most of my human dealings, I would only talk about the happy things in my life, and deliberately skip over the unhappy ones.  For example, the other day when John dropped everything at a moment’s notice to come pick me up (without me asking for it or even expecting it) at the Toyota dealership and asked me, twice, “How are you?”  I didn’t tell him what happened to me since the last time we met—several mini crises or emergencies.  But I told him about Car Car, which was unavoidable because he would need to make sense of why I ended up at the dealership.

After I wrote down my observation, my distracted attention travelled to my phone, to do some online shopping (for things that I didn’t really need).  Then my mother’s message came in:

“I am happy to come into your life in whatever capacity and for whatever purpose you wish.  Don’t worry.  There are no rules nor expectations from us as to how you have to treat or interact with us.  We are happy with whatever occasioned your contact.”

We in this case meant her and her mother.  In the early years of my healing, my mother didn’t really come in.  Rather, she was mainly standing on the sideline, watching but not intervening, even when I explicitly asked her to step in to help me.  At that time, the message I got was:  “It is not my time to come in yet.  But I will, when the time comes.”  So I was mainly relying on my father’s side of my ancestry, most notably my paternal grandpa.

Then one day, a spiritual healer who did Spiritual Response Therapy (SRT) relayed a message from my mother, saying that, “From now on, we would come into your life to nurture you, and to celebrate you.  There will be no judgement.  Whatever you do, we will only celebrate it.”  It was my mother and her mother coming through.  It almost felt as if my paternal grandpa had passed the baton to them, because I couldn’t feel the father’s side of my ancestors anymore even as I tried to contact him.

In addition to John, there was also Charles who stepped in to provide me a second line of support, though again, I didn’t explicitly ask for his help.  This was different from Beth and the guy upstairs, both of whom I had strategically positioned to assist me, and I was more explicit in my request for their support.

Amidst all these developments, I scanned for clues and meanings further out of my energy fields, to get a bigger picture of what’s happening to me and for me.  Specifically, I asked a volunteer card reader as to the purpose of John in my life, and she said, “John came to teach you how to go with the flow and become more flexible and accepting of things that pass in and out of your life.” I am extremely touched by his soul, and had connected directly with his soul to draw support and nourishment.

Yesterday, I re-established contact with Hassan, after a conflict and a prolonged silence.  We didn’t talk much, but in between the lines, I realized that he was not happy with his life, so I replied: “I would like to cheer you up, though I’m not sure how.”  He was very touched and appreciative of my message, even though I did nothing.  Later, when I mustered up enough courage, I said, „I know that I was being difficult and offensive the last time we chatted. Thank you for putting up with me.“ I think, he too, at a soul level, was here to help me grow and learn emotional connection.

In the old days, Chinese people drank bitter medicinal soup to heal from their illness.  As part of the tradition, the patient was given a piece of 嘉应子, a candied plum, to go with the soup.  From this tradition, I understood why the universe stationed helpers left right and center of me as I moved through the crises/lessons to graduate safely to the other side without unnecessary hiccups nor additional trauma.

There seems to be no extra furniture in my life at this point.  Redundancy and toxin are aggressively stripped off. Everything and everyone is there for a very important purpose as my soul drives me straight toward the finishing line with as little drama and retraumatization as possible. I have felt the energy of my soul. It’s like a horse with eye covers so that he can only see straight ahead, and is only charging straight ahead. Fierce and unwavering determination.

At the dealership, while waiting for John, I met Philippe whom I later discovered came into my life to function as a salve for my experience with the guy upstairs who repeatedly gave me the lesson of emotional neglect.  I guess I had graduated from it, unless the salve was just given during an intermission.  Near the end of that lesson, I realized the reason I couldn’t finish it off cleanly in the past was because it was interlocked with the wound of helplessness, and I didn’t have the mental clarity to notice their relationship.

There are many other people who came to my support as I move through my lessons, only that they are positioned a little bit further away from me as they are not so close to me.  Nonetheless, the help is there and is freely given.  And I give thanks to everyone who plays a part in my healing and evolution process.

As I finish one lesson, another is lined up waiting for me. The guy upstairs messaged me, after many days of silence, to tell me that he had a mini crisis. Honestly, I don’t have the appetite to deal with him, but I am very aware that he’s here to give me lessons. In that sense, it’s better to finish the lessons earlier than later.