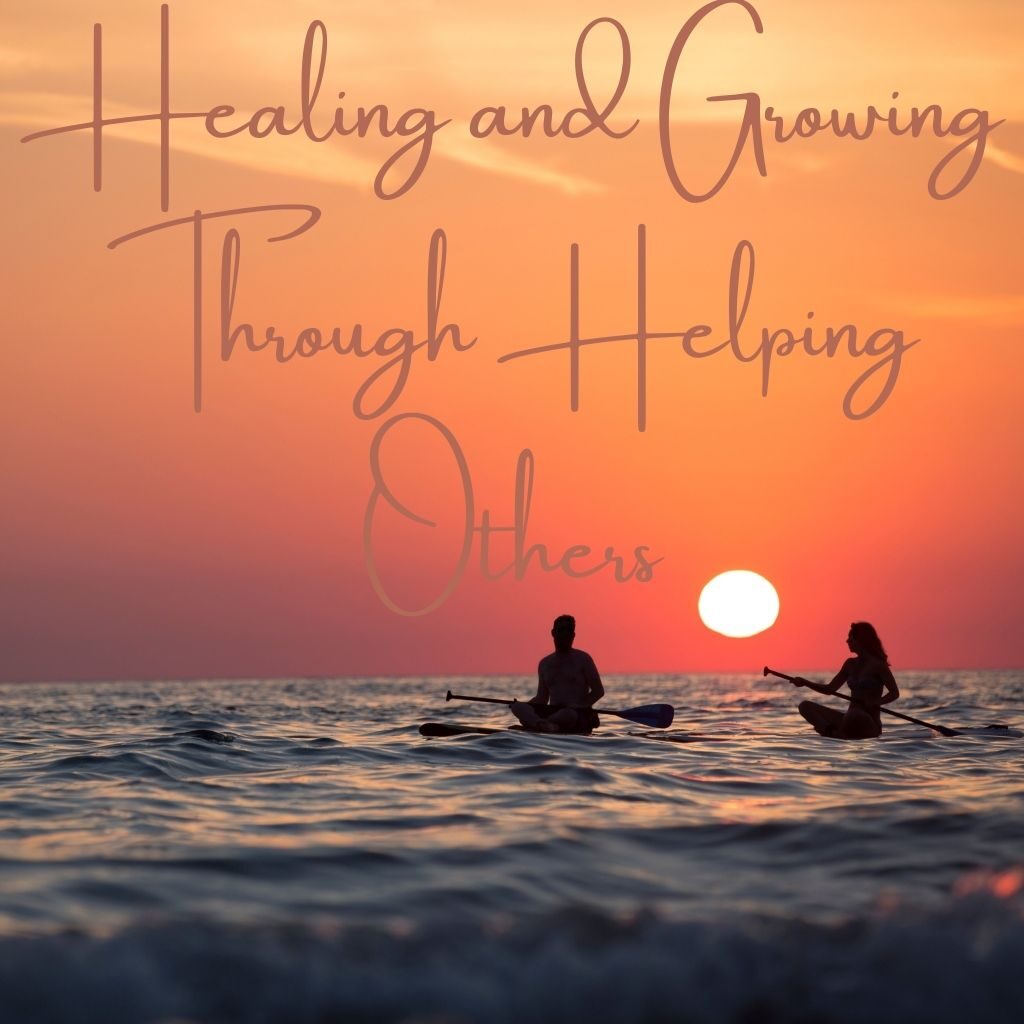 Healing and Growing Through Helping Others

Yesterday morning, I consulted the angels on a love matter, but one of the cards was about me being a guide or teacher counseling others.  Seemed irrelevant.  But I decided to be more open and receptive to whatever guidance they threw at me.

Last night, suddenly I thought of my online friend Charles whom I had known before the pandemic but didn’t really talk much to until very recently when we reconnected and he told me that he had cancer.  So last night I checked up on him, because he wasn’t someone who demanded attention, and tended to be content being a wallpaper even when he needed support.

He replied that he was still down.  Then I realized, oh, I didn’t pay close enough attention to him, and didn’t make my best effort to lift his spirit.

The reason I care is not because I care about him.  Rather, I care about the wounds that we both shared.  I also have imprints of hiding, of being afraid to ask for help when I need it, of thinking that I shouldn’t demand or expect too much from others, of thinking that others might not have the patience to deal with my complicated and delicate situation, of trying to solve things myself, etc.  So when I saw all those in him, I wanted to work on them, through him, for my own benefit.

I had previously told him, “I will stay with you, if you need.  Don’t ever feel that you are alone and helpless.”

He thanked me, but I felt that he didn’t or wasn’t ready to lean on me.  But maybe because I didn’t have both feet firmly planted on the ground, so anyone leaning on to me would surely cause both of us to fall.

But I felt that he was still trying to face the challenge alone, not yet open to receive support, and definitely not asking for any.  There was a certain sadness in seeing him like that, because that’s loneliness, helplessness, desperation, etc., that he locked himself in.  Sometimes, you drown in that.

Today, when I checked on him again, he told me about some symptoms that seemed to indicate his condition was worsening.  I wasn’t sure what exactly I was supposed to say in that instance, because if it was me, I would do certain things, but I did not want to impose my own ways on him, so there had to be some distance between us.  So I asked what his emotional reaction was.  Because oftentimes, when we hear bad news, we react negatively to the news, rather than constructively, which then make the whole situation even more difficult to handle.  The helpful response was to contain the situation, instead of to expand it.

He said he was disappointed.

That’s a negative emotion.  All negativities are unconducive to good health as they create an internal environment that makes it hard for the body to operate smoothly.  This is something that took me years to understand.  When the angels told me to be happy, to bring joy into my life, to live my life with zest, etc., I didn’t understand and couldn’t follow their advice, because when I was downtrodden, it was hard to lift myself up physically, mentally, emotionally.  But it was precisely this low dense toxic energy that was keeping me in poor health.  So I had to drag myself out of it, by nook or by crook.

He said it was hard for one to lift oneself up.

Yes, I know that too.  When I look back on that part of my life where I felt as if I was buried in a pile of rubbles from a collapsed building, couldn’t reach out for help, couldn’t move, couldn’t get myself out of the trappedness, psychologically buried in desperation, pain, fear, loneliness, helplessness, etc., leaving me completely stuck and inert, and all I could do was wait, hope, pray for rescue that might or might not come, and then to stay in that painful uncertainty where each moment felt like eternity, so I could totally relate to him.

I decided to step in a little bit more, asking for some details, and then realizing that he seemed to accept the symptoms.  He was not open to other options, and I was not willing to assert them.

But one thing I did assert again and again was for him to open up to receive help, to demand help, to expect help.  I said it in many ways, trying to drill it into him.  I honestly believed that was the key point he needed to address right now.

I had asserted my will upon him.  But that’s as far as I was willing to go.

Then I came back to myself, and checked to see what I had learned or gained.  I learned a lighter and subtler approach in asserting myself, not in a pushy or uncomfortable way, only in an energetically clean and clear way, firm and steady, much like how the angels would counsel me.

I don’t know how that would help in dealing with my love matter.  Maybe it would help me assert myself more fully, to speak my truth, and not be suppressed or submissive, because I think my problem came from having to please, to accommodate, to submit to a male figure, and let him boss me around, being afraid to shine my light, because my father would immediately squash me as soon as he sensed that I was letting my true self out, as if it was a threat, a sense of superiority, and as a self-protection mechanism I always had to stay beneath my father’s feet.  This is the kind of love that I have been attracting.  It isn’t love, but it is an electromagnetic reality that I haven’t fully stepped out of.

The part about asserting myself that I am learning is not about speaking up, but about speaking in a certain way—without negative charges, tension, compulsiveness, etc., because speaking from a suppressed an inferior position usually carries some grudge or other toxic emotions which won’t go down well with the listener.  So what I am learning is to speak clearly and cleanly, with respect for the other side, with no force or angst, and making sure that the other side isn’t pressured into a corner, that they have a choice in how they want to respond, and be ready to take no as an answer.

Neurologically, this is an adjustment in the tone, in the body language, in the eyes, etc.  The quality of a person’s gaze can communicate a lot of subtle meanings and feelings.  Authenticity and transparency would require communication of the subtler messages.  This is where I build trust and bond.

That’s quite a psychological shift for me.  I will see how things pan out for the next little while as I operate from this new position.