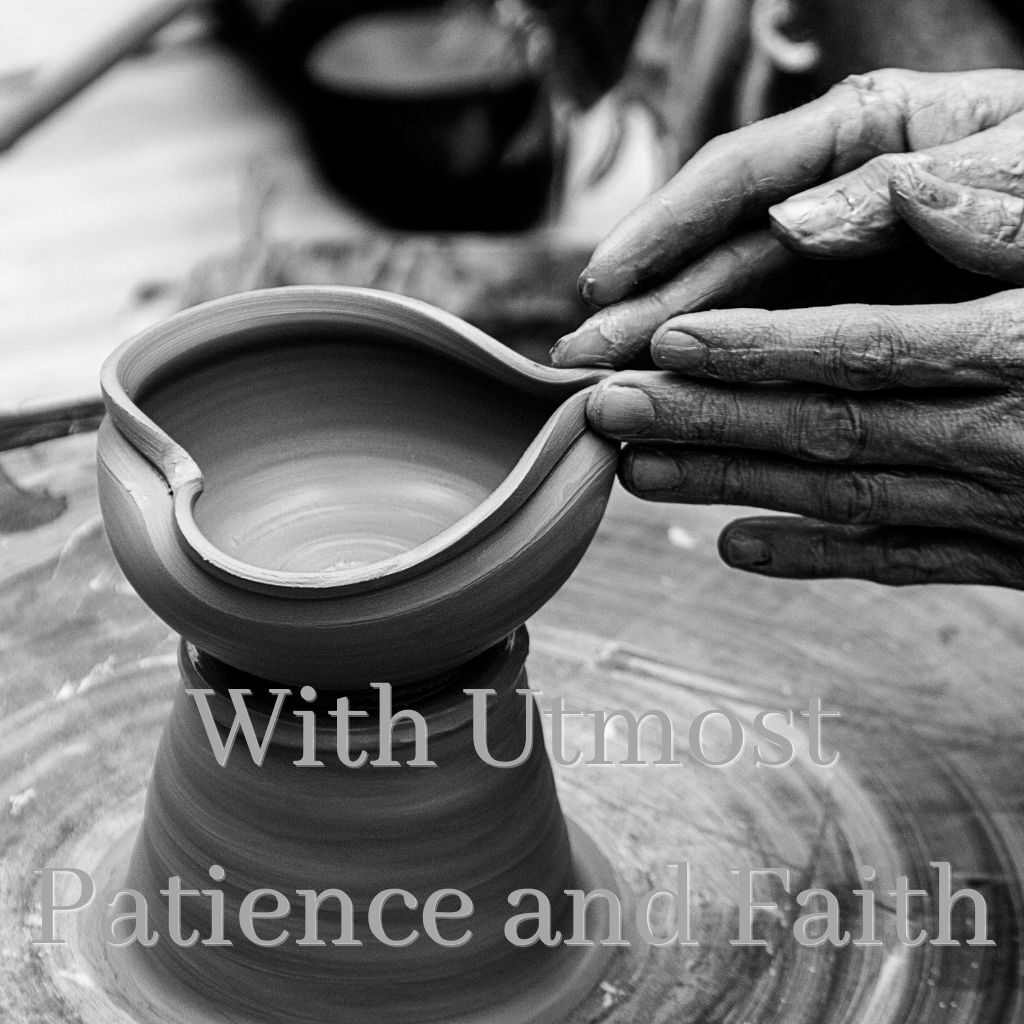 With Utmost Patience and Faith

I couldn’t seem to aim just above the net.  So I wondered, was it because he couldn’t aim well too, so having him train me was like transferring his weakness to me?  Since the first day of playing with him, I had noticed that he had all kinds of flowery techniques, but his aiming wasn’t that great, either going into the net or outside the table.

So I began to wonder, was this a problem of trainer or trainee?  Maybe I should get a professional trainer instead? Either way, it was frustrating, and out of exasperation, I said, “Okay, I need to grab Jon again!”

Then he showed up.

We played.  I didn’t explicitly ask him to correct my problem.  Because at that point I had already played for over an hour, and had gone past the point of eagerness to absorb new information.

So for the first ten minutes or so, I was sending Jon to the moon, to outer space, to other galaxies, and he kept picking up the ball left right and center.  I was quite embarrassed, but he was 100% patient and accepting.  I think a normal person would have lost interest in playing with me already.  But instead of giving up on me, he said, “It’s hard right?”

He was thinking that something was wrong with me, though hadn’t quite figured out what.  I said, “It’s the racquet.”  Someone had donated a new racquet for communal use, and it had a very different grip that the old ones.  So I switched racquets.

Still sending him all over the place.

Then he started to pay more attention to my movements.  He told me to aim down, and I said, “If I aim down, it will go right into the net.”  Then he said to aim level, parallel to the table, and I said, “Then it would go over the table.”

So for the next little while, he observed, and tweaked me every which way, sort of like how a sculptor would mold a piece of clay.  With patience, attention, care, respect, faith, trust, and love.  Every single time he pointed out a new error, I would stare intently at him, because he didn’t articulate his thoughts properly, so sometimes I couldn’t quite catch his meaning.  But today, I really telepathically and linguistically tried to grasp his meaning.  And I found him straining for words half the time, leaving his sentence half-finished, dangling in mid air, like a ping pong ball traveling in mid air, in slow motion, between the two ends of the table, and I tried to anchor his meaning onto my end by filling or finishing his sentences for him.

But to be fair, he put a lot more efforts in speaking today than he did previously.  Maybe because I stared at him with my eyes almost popping out of their sockets.

This brings me to a much larger question:  how do I interact with people who are not good with words?  More specifically, with English words?  I find myself constantly going beyond the linguistic level, to the telepathic level, to grasp the other person’s meaning, then say what they mean for them, and wait for confirmation.  It’s like I am doing part of their speaking for them.  But I don’t think effective communication is supposed to be like that.

There is something in me that is attracting this experience.  Blocks in communication, blocks in mutual understanding, blocks in human connection, psychological isolation, loneliness, imprisonment, oppression, repression, suppression, denial of emotional nourishment, self-punishment, shame, inferiority, fear of punishment or abuse if I open up myself, self-protection, restraint, etc.

It used to be that my caregivers who couldn’t speak coherently would expect me to catch their meanings which tended to come in the form of instructions, and when I misunderstood them and executed their instructions wrongly, they would reprimand me and squash my self-esteem like I was the stupidest person.  Out of a need for self-protection against such oppressive forces, I tended to telepathically catch meanings, which detached me from the ground, and I wasn’t allowed to question their instructions as they would construe that as questioning their authority.

So the fear of punishment I identified had a lot of emotional charges and imprints–grief, helplessness, injustice, rage, etc.  But whatever I have identified, I have cleared.  Hopefully that will pave me a smoother path in communication ahead.

After Jon had highlighted most or all of my errors, I played better.  And I found that improvement to be surprising, in the sense that I needed literal and linguistic guidance to correct motor coordination.  Why did I not learn motor skills through observing other people’s physical movements?

I know that I have difficulty with physical coordination, like my nerves are not built efficiently, that they were randomly constructed around and throughout my body, perhaps to meet survival needs as a child growing up in a hostile and toxic environment, and then entering adulthood with such a neurological foundation would not make it easy for me to lay new motor skills on top with the same level of ease as those who have grown up in a nourishing and safe environment.  Intuitively, I didn’t want to acquire muscular strength and power in my ping pong training previously, because I wanted to shave off the existing neurological pathways first before building on new ones.

As I traverse on my healing journey, I do not have clarity nor visibility into the next few steps, most of the time relying on intuition and whatever the universe throws my way.  Now that Jon is training me, I think it means that I have arrived at the psychological juncture where I can start developing new motor skills.

If the universe is coming to me through him, then I think I now do have a lot of clearance to proceed, because he is generously showering me with assurances and affirmations like, “See, I know you have potentials.  You will appear in the Guinness Book of Records!”  And giving me the brightest smiles while saying it!

Such uplifting and powerful encouragement!  What more can I ask for?