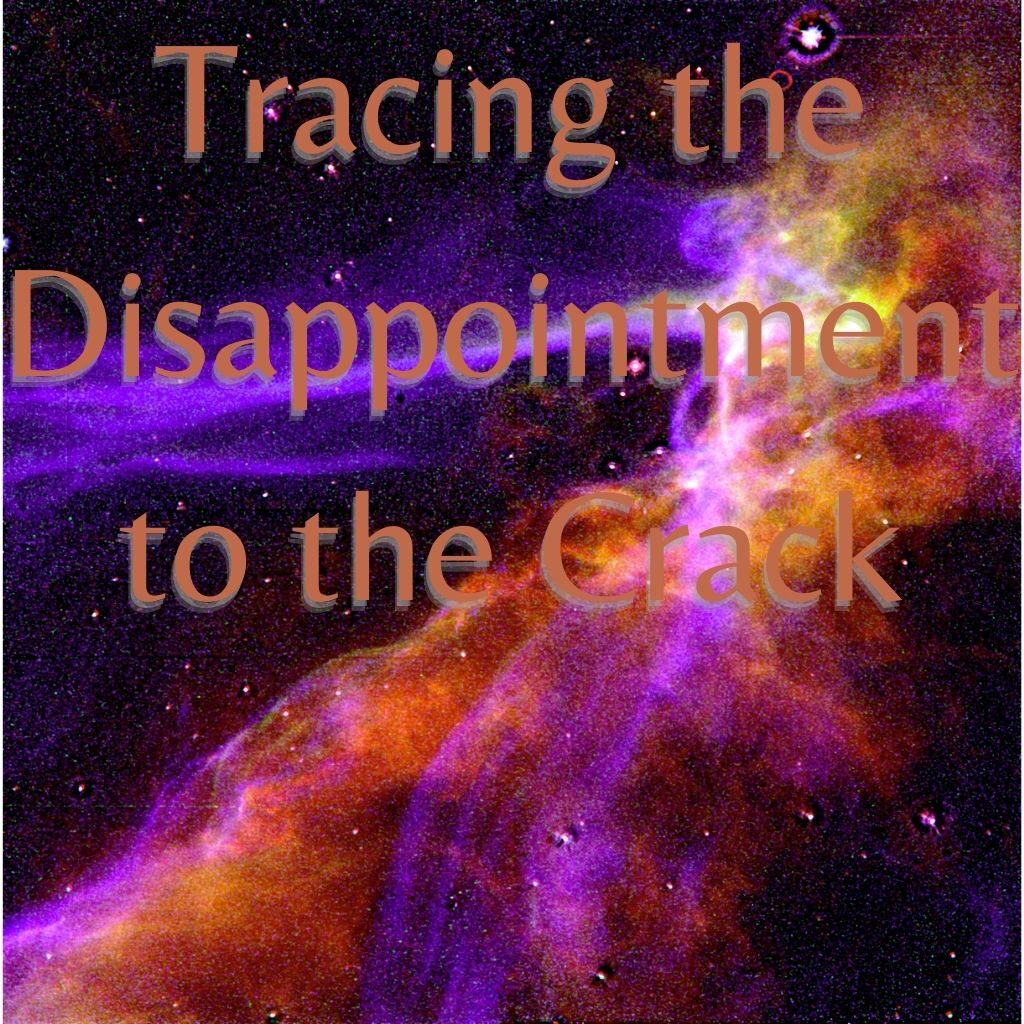 Tracing the Disappointment to the Crack

When I started practicing ping pong with my own ball, the ball bounced all over the place.  Once, it landed on my head.  I felt that it was petting me, which reminded me of another story from about 2017 when I went to an equine healing center.  Three horses greeted me excitedly.  I went up close to them.  Then I felt that one of them was petting my head.  I was quite touched by that gesture, because normally humans don’t pet me, and least of all animals!  But I felt the one petting me, the tallest one, was showing her affection for me.  Since then I held on to that memory fondly.

In my mind, the ping pong ball that petted me and the horse that petted me were emotionally associated.  There was one more person, the one who gave me attention while I was practicing, that got tied in to this emotion.  So in my psychological space, there was a triangle, with three points, three separate thing/animal/human, holding this emotion together.  For a few days I felt this emotion lingering in the air while I was practicing, because the affection of the horse continually came through while the ball bounced really high, and I would speak to the ball affectionately like it was my playmate.

The days passed. Other energies floated in, sort of like clouds, after the affection had left.  I had more or less forgotten about the triangle, until today, when I suddenly thought of it while I was practicing.  I had cognitive memory of it, but I didn’t feel the emotion anymore.  So I mentally hovered around that fact, and gradually zoomed in to it though I didn’t put any conscious effort to trace it.

But as I thought about the disappointment from one of the angles in triangle, I kind of wanted to understand more of it, so my attention stayed on that angle for a nanosecond longer than I would have if I were to simply go pass it.  I didn’t manage to trace anything from that angle, only sensing a thick darkness.  Inaccessible.

Then the ball cracked.

I didn’t know that it cracked, but I noticed the difference in sound.  I thought it was strange, but couldn’t figure out what happened, because it still looked round, and there was no visible dent, and it would bounce unless it hit the crack then it wouldn’t bounce.  So the ball bounced in an unpredictable way.  I inspected it again.

I finally saw the crack.

My first reaction was that maybe I unconsciously projected some negative thoughts again?  Like how I manifested the disappearance of the community ball?  But I was sure that I didn’t.  So I scanned for reasons, not internally, but externally, on the wall and the table, to see if there was any sharp splinters or such thing that could have cut the ball.  I wiped the table, and didn’t notice any sharp debris.  It was the space between the wall and the table that the ball cracked, so I really didn’t have to look far.

Then I decided not to look that far outside, because all external events originate from internal events.  So I scanned internally for what could have manifested that.

I expected my ball to last longer. I had seen the same community ball sitting there for many months, so it didn’t make sense that my ball lasted only for three weeks, when I didn’t apply that much force on it.

I read that the balls do wear out quite fast.  But like human life span, some people live to 50, some to 100.  You can average them mathematically, but there should still be a specific reason for each individual lifespan.  Even my last car battery lasted for a decade, when the general opinion was a few years. So it is basically a no-depth statement to just conclude that they die after an average time period.

While I was digging for a reason, I scanned for all my thoughts that could possibly have touched or landed on the ball before and during the practice.  There was no culprit.  The only one that came close was my thought about the triangle.  The moment that my attention landed on the thick darkness behind the collapsed angle was the moment I heard the sound of the crack.

The night prior, I was sanitizing my psychological space relating to the disappointment.  But sanitizing produces a different effect than the crack.  The crack is a negative energy from inner space blasting through to outer space, and the blast hit the ball.  Sanitizing probably had the effect of initiating a house-cleaning, hence the thought of the triangle came to my conscious mind today for release.

I know that if I put my attention on something in my inner landscape, it will illuminate and give power to that thing.  For healing, attention on a trapped or stagnant energy would cause it to unleash and release.  But this is my first time experiencing it and tracing its trajectory from nonphysical to physical.  I think if my arm wasn’t hitting the ball, the disappointment might not have shot out to hit the ball.

I am still learning about the inner landscape.  My archeological effort fascinates me, and helps me become more conscious of the thoughts and emotions inside me, and their physical outcomes–if they do happen to burst through to physicality–always surprise me.