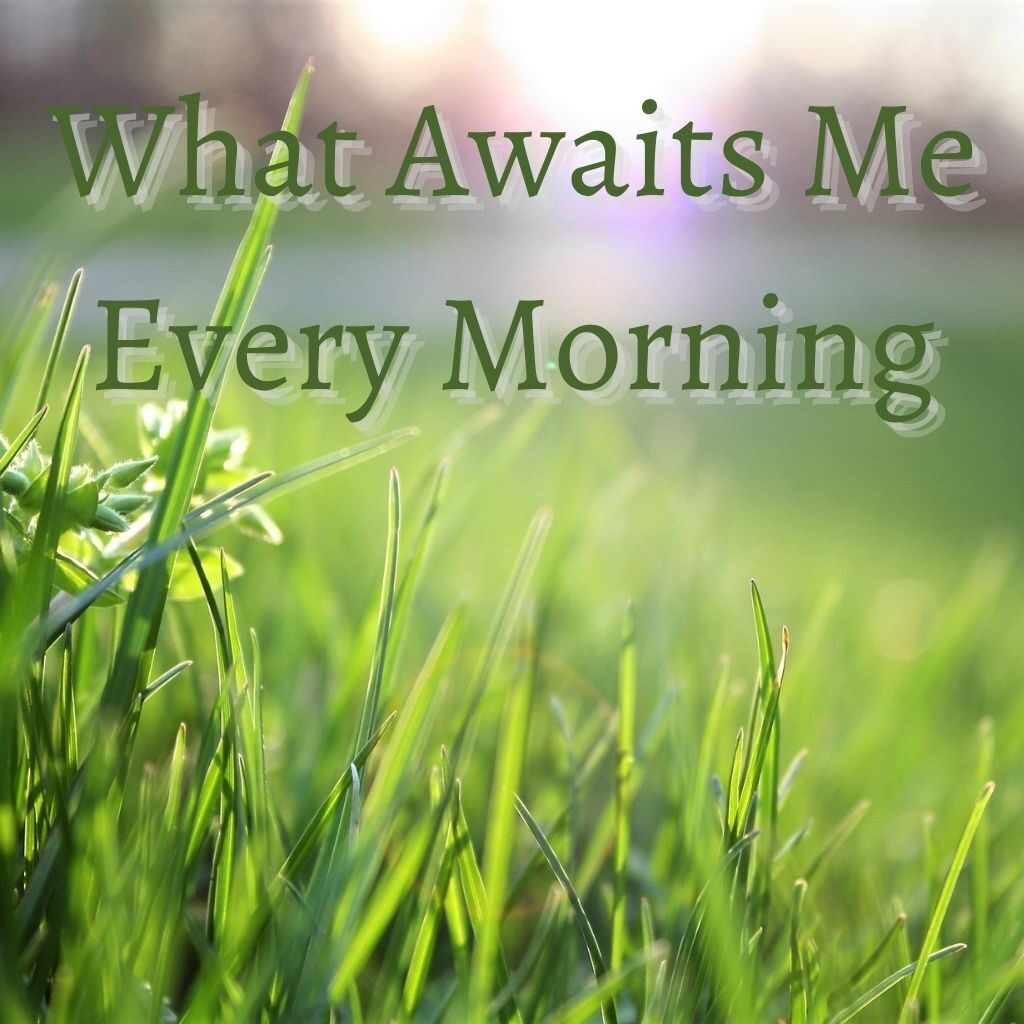 What Awaits Me Every Morning

Every morning, I go for a walk in the neighborhood.  There is one thing that surprises me about this routine–everyday I see something different.  It’s the same route, yet, each day greets me with some unexpected or amusing surprise, almost like there is a lovely present awaiting me everyday.  For example, one day there was a strange group of birds that I don’t usually see in my neighborhood, another day there was a double rainbow, then another day I saw a bunch of gophers frolicking around in the park, then a few days later I noticed Rozol being used to control their population.

This morning, along my route I saw a green caterpillar crawling on the ground of a parking lot.  I squatted down to watch him.  He was trying to dig his head into the ground, like an earthworm trying to go home.  But it’s concrete.  He would never succeed.  I started to wonder, how did it get there?  There was no tree or grass nearby.  Did he get blown by the wind?  Or had he been hiking all night long?  He must be thirsty and hungry!  Because for him, crawling on the concrete would probably be like a human walking in a desert.

As I continued to watch him, I began to think, whether I should intervene or just leave him be.  I thought of those wildlife documentary camera crew.  They don’t intervene in the natural order of things in the animal world, even when an animal is obviously in a life-and-death situation.  Then I looked at myself, knowing that I have a problem of minding other people’s business, I thought whether I should really stop being presumptuous.

So I stared at the caterpillar for quite a while, debating within myself.  I decided to intervene.  It was something that I was genuinely motivated to do.  I didn’t want to watch him crawl indefinitely, without a GPS, not knowing which way safety was, and what if along the way someone absentmindedly or worse, intentionally, stepped on him, or he crawled for too long and perished out of dehydration or what not.

First I attempted to pinch him with my two fingers.  But I was afraid that I would over-squeeze him, or he would try to wriggle himself out of my fingers.  So I looked for a piece of paper, and luckily, I had a piece of tissue in my pocket, so I used that and laid it down like a carpet for him to step on.  But he refused.  No red carpet treatment huh? He seemed to not trust the texture of the paper, preferring the safety of the ground.  While I struggled every which way to get him on the carpet, I observed that I got impatient and even slightly agitated while doing so.  “Gentle, gentle.  Easy, easy.”  I looked like I was talking to him, but in truth, I was talking to myself.  I took a couple of big breaths to slow myself down.  I knew his resistance was most likely a reflection of my energy fields.  I told myself I had to let go of my stubborn pattern of agitation and frustration.  This is a much overdue change!

After I calmed myself down, and gave him as much patience as possible, though in truth I could still feel myself being controlling and impatient, but my calming down did make him more willing to crawl onto my little carpet.  Then I transported him to the perimeter of a field.

I laid the carpet down, but he didn’t want to move.  His legs gripped firmly onto the carpet.  I wasn’t sure how to encourage him to disembark.  I wanted to flick the carpet, to spring him off to the grass, but I wasn’t sure how he would feel about a trampoline experience.  Assuming that he was apprehensive, I didn’t want to make him even more so.  I put his nose right next to the leaf of a weed.  He seemed to welcome the texture of the leaf, and started to crawl toward it.

I was quite satisfied with my taxi service.  I don’t know if he was or not.

Later, I returned to the question of whether I should have intervened or not.  Was it truly a better outcome for him, or was I only projecting my own thought onto him—that my action wasn’t for him but for me?  Then I realized, the higher question should be, what did I gain or learn from the opportunity that he presented me?

He gave me the opportunity to see myself, specifically, my anxious and impatient tendency.  I am not calm and relaxed when I have to get things done.  Rather, I’m uptight.  He gave me a meditative learning opportunity.  Life flows a lot smoother and more effortlessly when we are relaxed.  We use less energy to get things done, which means, work is less stressful and could possibly be enjoyable and pleasant.  I have always known the concept, but it takes me forever to change my stubborn ways!

Although my encounter today was a very small, almost insignificant event, I find that the beauty and wisdom of life lie exactly in these unassuming little details all around us.  The way to discover them, is tune our attention to the humble things around us, and really look.  Look deep.

The treasure of life is not in some grandiose and extravagant things, but rather, it’s in the simplest things.  The awe, the magnificence, the joy that they offer are subtle but deep and touching.