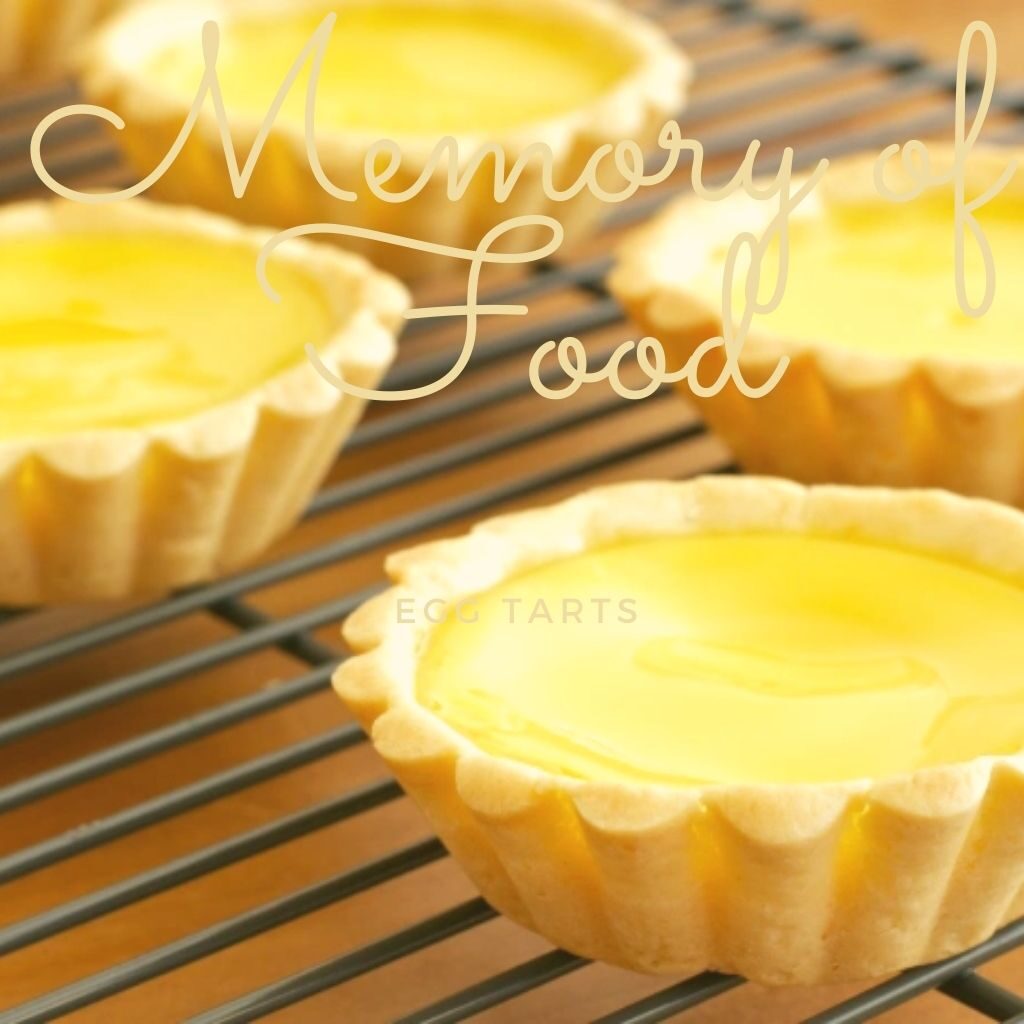 When our body moves to a different geographical region, we call that travelling.  When something comes to our body, what do we call that?  In my mind, that is akin to travelling, because the experience itself evokes our senses, gives us a sense of awe and excitement, and potentially leads us to discover more of ourselves.  So today, I am going to travel with food, more specifically, with egg tarts.

My first appreciation of egg tarts was from my Cantonese colleagues who had a special interest in egg tarts.  One day, they bought egg tarts from a bakery for afternoon tea.  Before serving, they would pop the tarts in the oven for reheating.  This step was important to the appreciation of the flavor, something I realized much later.  After the tarts were heated and smelling sweet and warm, then they would begin eating.

There was a time in my life when I would go for dim sum weekly with my father.  But we never ordered egg tarts, even though it was one of the regular items on the dim sum menu, because my family had no interest in it.

When I went to Macau, people suggested that I tried their Portuguese egg tarts.  I was guided to a famous egg tarts shop.  The queue was very long.  But I decided to join the line.  Luckily, the line moved quickly.  I bought some tarts to go, because there was no place in the small café for sit-in dining.  I took the fresh-from-the-oven tarts, and hiked to the nearby Monte Fort.

Arriving at the top of the mountain, I looked for a place to sit.  There were security guards telling people not to sit on the stoned wall, but after the guards left, I went to sit on the wall, with my feet dangling against the wall, viewing the city and enjoying the mountain breeze on a hot day.  There I began to devour my tarts.

Frankly, I don’t remember much of the tarts, aside from the fact that they were still piping hot and very soft, almost jelly-like.  I could taste the freshness, but not the actual taste of the tarts.  I am not a connoisseur of egg tarts, but from the influence of my Cantonese colleagues, I picked up the cultural appreciation, though not so much the epicurean appreciation.

In those days, it was rare to find Portuguese egg tarts in my city, though regular egg tarts were easy to find.  So that was my first taste of pastel de nata.

Many years later, in Portugal, a tour guide brought me and a few other travellers to a shop that was famous for its pastel de nata. Again, I tried the tarts.  I can only say that it was passable, but nothing else, because it didn’t form much impression on me.  I returned to the shop a couple days later on my own, and this time, I sat down at one of the tables inside the café to order a drink plus some other deserts, in hope that the ambience could help me savor the tarts more fully.  But I didn’t really taste much, aside from the fact that it was not bad.

One thing that is quite mysterious to me is that although they were good, I can’t remember the taste at all.  I can’t say that my taste buds are dead, because I do have memories of good food—the chicken and lentil soup in Jordan, and the dinner in Egypt.  Those two taste memories were exceptional, as my whole body came alive, all my body cells were dancing like fireworks blasting out with joy when the food met my tongue.  Other less intense memories would be the coffee I drank in Paris and in Bellinzona, as they also had a similar effect of bringing all my senses to life, as if inviting my whole body to wake up and be there for life!

A few years later, in my own city, I visited a Portuguese bakery.  The pastries were not freshly made, and seemed to have been sitting there for at least a day, looking a bit forlorn and bored of life.  Without the freshness, the tarts weren’t good, and that’s when I learned that the custard could only taste good when it was fresh out of the oven.

A couple weeks ago, I bought a box of almond tarts.  I didn’t expect much from it.  I bought it simply because I wanted to try something new.  But what a surprise it gave me!  While I mindlessly popped the tart into my mouth while watching a show, the tart managed to wring my attention away from the show. Quite a magnificent feat!  And it did that without coming fresh from the oven.  In fact, it showed no sign of ever being in an oven.  Nonetheless, its chemical composition alone managed to tickle my tongue and form a special impression in me.  The sweetness of almond was strongly evident, though the sweetness itself was subtle.  The way it claimed my attention was similar to the way Phil Phil (my guinea pig) claimed my attention when he asked for fresh vegetables—he would just stand there, looking into space, not necessarily at me, and I suspect he cannot see me, but he had a way of praying into space and holding still in that position for a long time, quietly, patiently, devoutly, and then vegetables would materialize from space.  Likewise, the almond tart quietly and gently demanded my attention, almost as if it’s gazing at me, without calling my name, but simply smiled at me, a very kind and almost feminine gesture, a very nurturing and comforting way of cuing me to taste it.  The tasting experience is almost maternal.

My memory of food is usually not tied to their flavors, but with emotions, the ambience, the stories, etc. Using my taste buds as the gateway for external consciousness to travel into my internal consciousness, what I tend to perceive more is the psychological stimulation even though taste is about chemical stimulation. That is how I orient myself with the external world through my tongue.