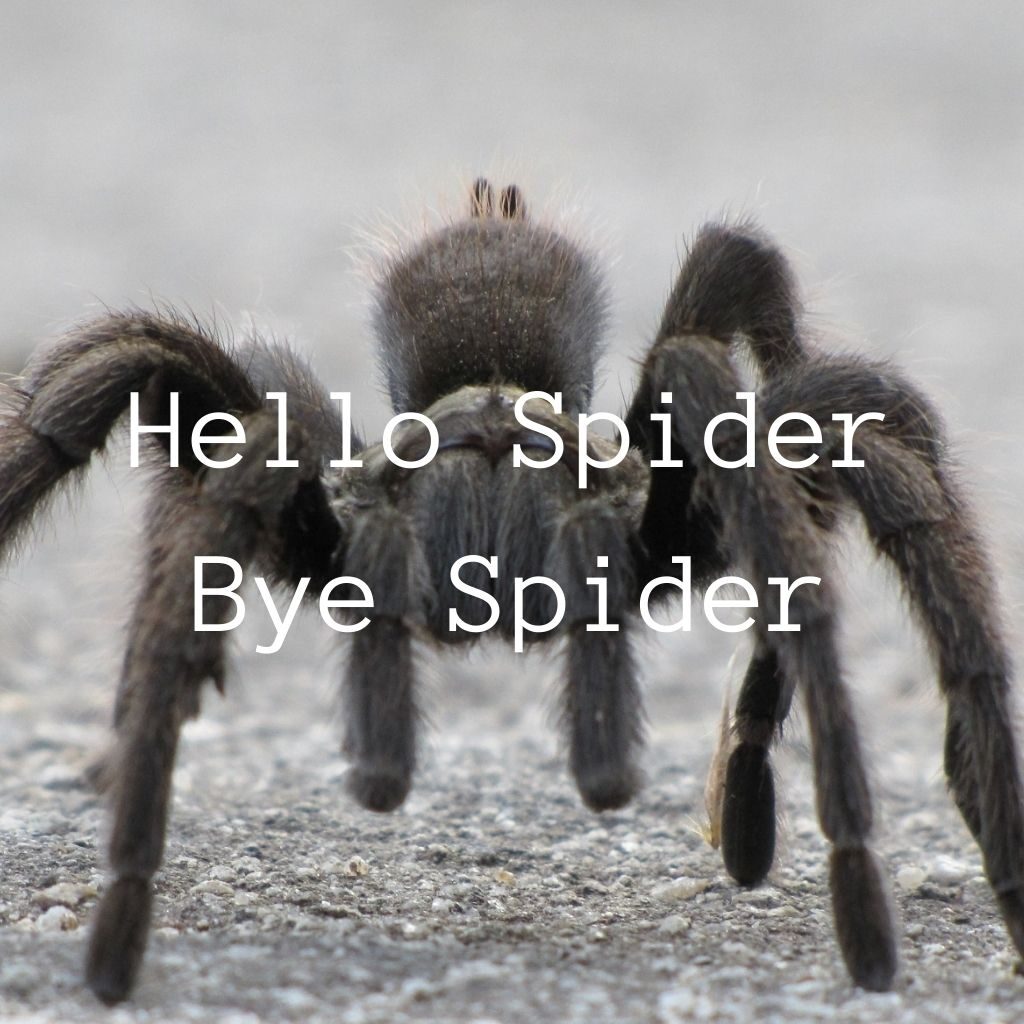 It’s spring time! Everything starts to grow.  I estimate in about two or three months, the crawling creatures will start to show up in my condo, uninvited.  But this year, I am less worried about the intrusion, because I have moxibustion, which is supposed to have a fumigation effect.

Last summer, as usual, I individually escorted each crawling creature out of my condo.  There was one spider who crawled onto my floor rug.  I was about to do some stretches on the rug, but seeing him, I decided to shoo him off the rug first, in case I ended up making spider meat ball.  But as soon as I talked to him, he started to walk in a non-linear fashion.  Startled perhaps.  He even stalled for a few moments, maybe he sensed an interference in his mental process.

I looked at him and wondered, perhaps I should be calmer in my interaction with him, instead of harshly telling him to get off the rug, which probably disrupted his thought flow, if he had any.  But seeing that he began to walk again, this time frantically toward the center of my rug, the opposite of where I wanted him to go, I got a bit excited, saying, “No, no, no!  Off, off!”  Pointing at the perimeter of my rug, as if he could see my fingers!

I don’t know why, usually when I tell crawling creatures to go one way, they have the tendency to go the opposite way.  Then I repeat myself, louder, more frenetically.  Then the creatures panic, and go every which way, faster, sometimes circling round and round going no way.  And my controlling nature starts to kick in, wanting to poke or nudge them in a certain direction, and they get even more distraught and shrink or dance or do every nonsensical thing.  Usually at this point I would use brute force, which is to grab a piece of leaf or twig or paper to scoop them up and transport them.  But they would run away from my tool.  That psychological tension looks like a little unchoreographed dance, with both sides being very anxious.  Sometimes I leave them at this point, seeing that they are not going to cooperate.  I just walk away hoping that they won’t be crushed by the next pedestrian.  And they seem to calm down without me.

But with the spider on my rug, I didn’t want to let him claim the entire rug and go elsewhere to do my stretches.  So I had to get him off.  Interestingly, when I stopped bugging him, he just stood there, perhaps momentarily spaced out.  I realized his irrational movements were most likely caused by my wild emotions. So I tried to let go of my emotions and my controlling or compulsive tension.  But I noticed that I didn’t completely let go.  Because I really really really wanted him to leave, and I didn’t want to take all day.  Impatience.

From that psychological state, I decided to take action. I grabbed a piece of paper, and tried to scoop him up.  He tried to run away from the paper.  I was appalled.  Why would anyone not want a free ride?  More useless emotions!

I was also afraid that I would lose sight of him, because I was afraid that I might accidentally land on him.  So I said, “I don’t care how you feel.  I need to take you out.”  This time, my intent and focus were very strong.  I felt that he also perceived that.  He eventually got on to that piece of paper in my hand with less rebelliousness.  I think he was trembling while standing on it, but he didn’t flee.  So I said, “Okay, okay, just one second.  I will get you out right away.”  I quickly walked to the balcony door, opened it, and placed him on the floor outside.

Relief, for both of us!

The next day, surprisingly, I saw another spider.  This time, in my bedroom, next to my modem on the floor.  I thought, ‘What!  Roaming freely in my boudoir?  Absolutely not allowed!’  Exasperated, I immediately wanted to get rid of him.  This was private property!

But having learned my lesson from the day before, I first tried to calm myself down, though I realized I actually couldn’t, realistically speaking, not within a split second.  So rather than calming down, I held my breath, which had the effect of temporarily stabilizing my energy fields.  I ran to grab a piece of paper, and came back to scoop him up.  This one was less inclined to break into a run, surprisingly.  He was aware that there was someone hovering over him.  But he didn’t move, perhaps not knowing which direction to run towards.  So he stood cautiously and nervously in the same spot.  When I scooped him up, he was also less intent to flee.  I am not sure whether it was because of my stabilized energy fields and highly focused intention, or because this spider had a meeker personality.  Maybe because I was holding my breath, so he was also holding his breath too?

My interactions with animals have taught me that they are very sensitive and can perceive my energies a lot more than my self awareness can.  Undomesticated animals are very good mirrors of our energy fields, and can be used to better observe the contents in our inner world.  While I do not like to see crawling creatures in my condo, I think having the occasional visit isn’t an entirely bad idea.