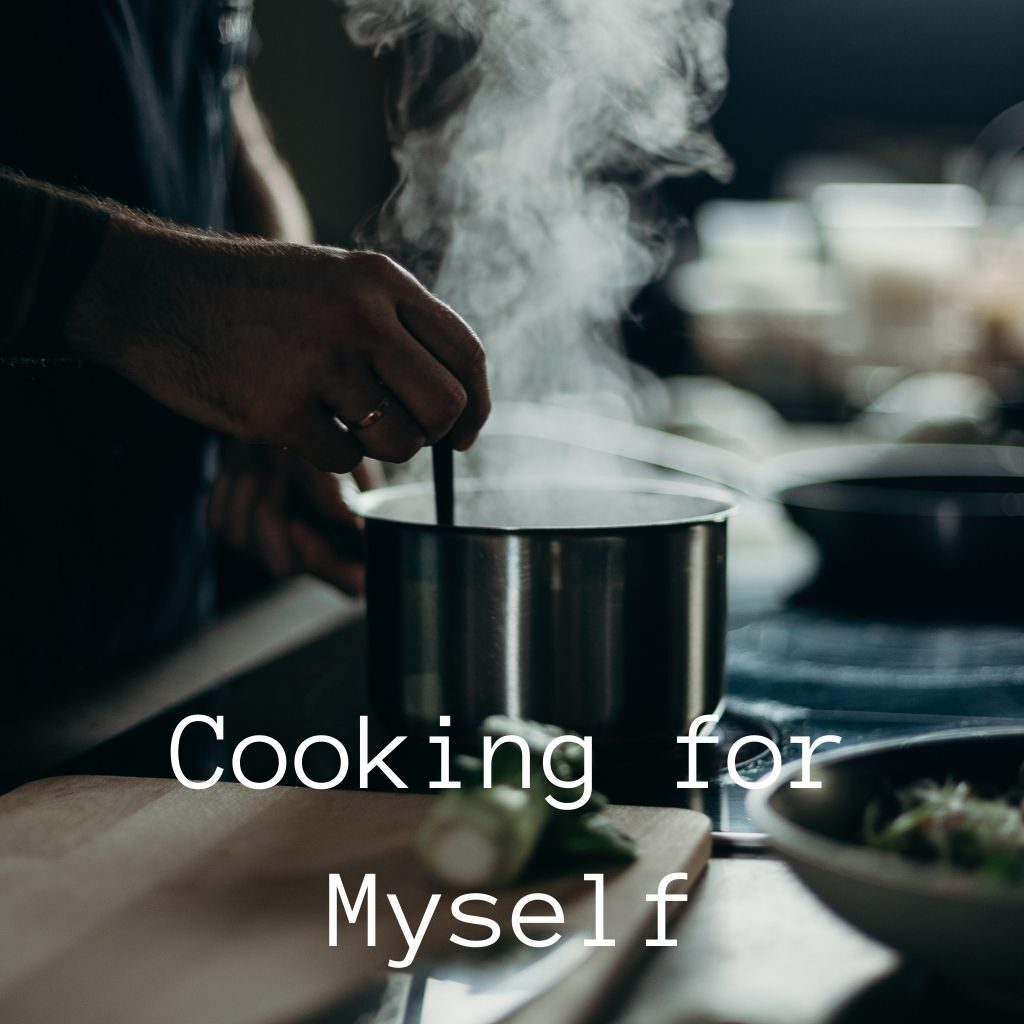 Many years ago, when I was on a road trip with my travel buddy, we stayed at a hostel.  In the morning, the travelers made their own breakfast in the kitchen.  One tall guy was making pancake.  He said, “I’m just about done here.  You can make yours after me.”  I looked at the pan in his hand, and the flour on the kitchen counter, my mind went blank because I didn’t know how to make a pancake, and I was too ashamed to say so, seeing that I was a bit older than him.  So I didn’t say anything.

Later when my buddy came to the kitchen to join me, I told him about the pancake, and he looked just as clueless as me!  But he was also shameless, so he asked around.

I don’t remember ever making it, but I remember eating it.

My culinary skill never improves much since then.  I can cook, but only I can eat it.  Because I don’t follow recipes.  I just make whatever suits my body, and because I am only feeding myself, I try to be efficient by throwing everything into the same pan.  Frying, steaming, and poaching are all done in the same pan.  So the final result can be a bit wild.

For example, I would poach or fry eggs but I don’t make omelet or scrambled eggs because the latter requires two extra steps:  whisking the eggs in a bowl and then washing the bowl.  Although I try to be low maintenance, I try to cook every meal and avoid leftovers, because I only want freshly cooked foods.

In Ayurveda, there’s a concept called ama—toxic product of improperly digested food.  One of the ways of avoiding ama is not to eat stale foods.  So I eat freshly cooked foods, though my habit did not evolve from learning Ayurveda.  My body just felt heavier after eating stale and leftover foods, which slowed my energy flow, making me sluggish and apathetic, sometimes my face loses its glow and gets oily too.  I am guessing I also tend to put on weight when eating stale foods, or any foods that doesn’t have fire or life force.

I feel more alive after eating fresh fruits and vegetables, and even raw meat, because of the abundant life force in them.  But I cannot eat too much raw foods because I don’t have enough digestive fire to thoroughly process the food.  Fire is one of the four elements with transformative effect, and digestion is a transformative process.  I add fire to food by cooking them.  If the cooked food sits too long—several hours—the fire would have dissipated, and the sitting food would have a sinking effect on my body, making me feel heavy, sluggish, apathetic, and my body would have to muster its own energy to counter the sinking effect.  Fire has a rising effect, as evidenced by the rise of water vapor when fire is added to it.

The more sinking food I eat, the more energy my body needs to lift the sinking effect.  Mathematically, this is a losing business to me.  For me, one of the purposes of eating is to gain energy, which is the life force within the foods.  Ideally, the net effect of eating should be a net profit, ie., the overall energy expenditure of my body to digest, absorb, transport, and eliminate must be less than the energy acquired from the foods.

The kind of energy I am referring to is not chemical energy measured in calories, but something that encompasses the liveliness of foods.  For example, if you take a garlic and put it in water, it will sprout.  But if you cut it up, it will never sprout.  Both states contain the same caloric energies, but one is irreversibly dead and the other is still alive.  That life force is the kind of energy I am trying to eat.  And from that angle, I think I can understand why Muslims don’t eat dead animals.  Also, packaged and processed foods practically have all of their life force wrung out of them already.  If I eat them, I might be eating the nutritional and chemical content, but definitely not the life force.

The life force in foods makes my body and mood lighter.  And when I feel lighter, I am more motivated to exercise, which further improves my wellbeing.  After entering my body, the life force transforms into enthusiasm, joy, movements.  It’s a positive and uplifting cycle.

Ayurveda suggests using herbs or spices to improve digestion.  One popular spice is ginger.  But I only limit the consumption of ginger to morning, more specifically, before solar noon.  I peg my daytime energy level to the sun’s position.  The yang energy in the human body rises from midnight and peaking at noon, then gradually falls.  This trajectory mirrors that of the sun. Ginger has the effect of stirring up my yang energy.  When the sun is going down, my body’s energy is also winding down, but if I eat ginger then, it will go against my rhythm, which means my body needs to use its yin energy to counter the effect of ginger.  That’s a poor use of my energy.

As you can see, my cooking skill is not about culinary flare or artistry.  It’s about building the most suitable bridge between my body and the life-sustaining substances in nature, and about honoring the two sides of the bridge with occasional reference to Ayurveda and Traditional Chinese Medicine.  When my body can go with the flow of nature, reducing resistances and heaviness which produce stress, then health will follow.

When I used to read about foods in Ayurveda texts, I did not understand them.  To me, it’s just a bunch of text, with most of the key concepts being in a foreign language.  But as I listen to my body more, some of the Ayurvedic wisdom naturally becomes intuitive to me.  My approach to health and wellness starts with learning about my body.  By listening to the peculiarity of my body, I learn to establish inner harmony by balancing my body’s shortages with the universe’s abundances.