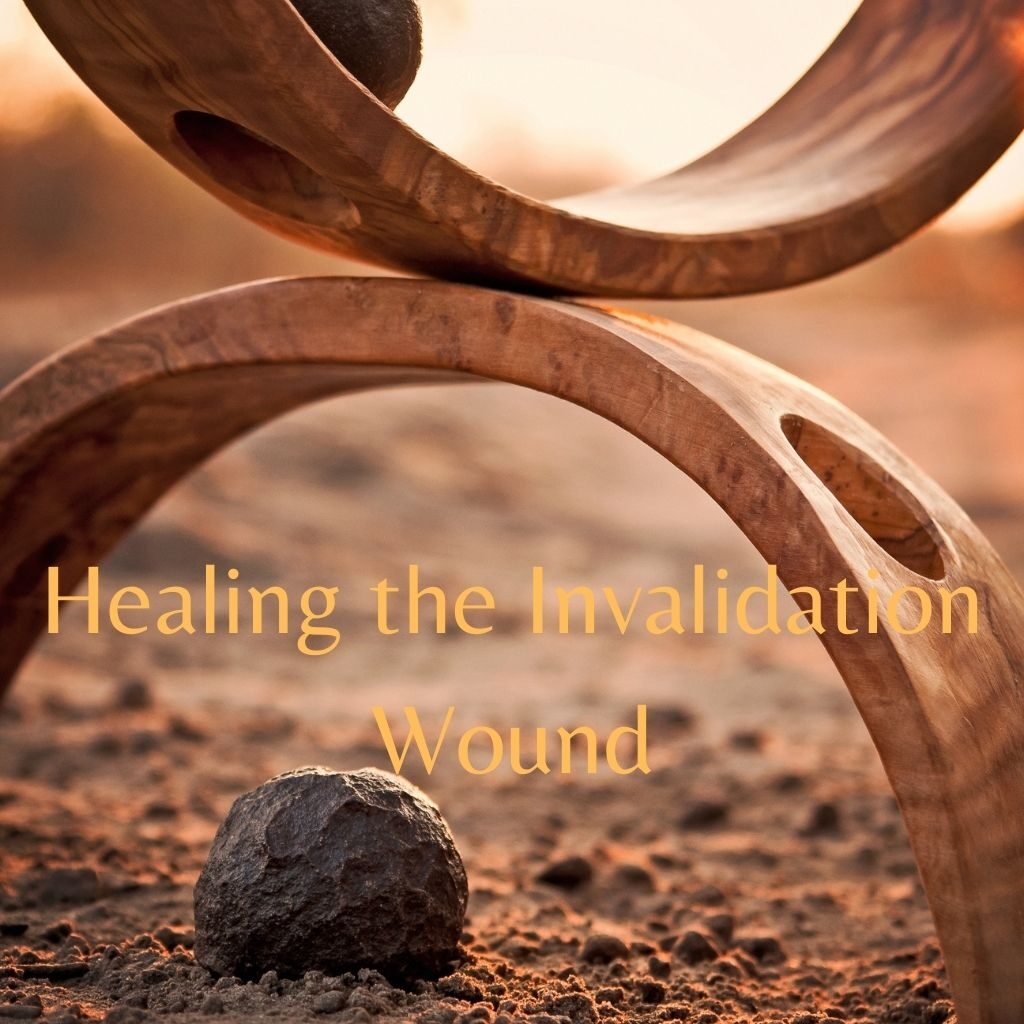 Today, I learned something new about my psychological wound of being invalidated.  During a forum discussion, I was invalidated when someone perceived that I didn’t understand her, almost implying that I was retarded.  Ignoring her emotions which shot out like a projectile, I saw a familiar pattern that she was activating.  The pattern of invalidation.  Invalidating my intelligence. Normally, this would trigger a fight, and the more we invest energy into a battle, by insisting that our feelings, thoughts, experiences, beliefs, etc., are true, the more we trap ourselves in the battle.

When I noticed the pattern of invalidation, I was surprised, but didn’t react.  I was surprised that my old pattern was still there.  It’s like scrubbing and scrubbing a stain that would never go away completely.

I tried to come to neutrality—no emotional reaction—observing the emotions between us.  Only in that zone was I able to respond with presence of mind, although I didn’t have too much clarity in that brief moment, as my focus was predominantly out there, where the discussion was, instead of in here, inside my psychological landscape.  In other words, I had a tiny bit of free space—a space without tension—to allow my awareness to tune in to my inner compass which was guiding me to take the next best step leading me toward my highest potential.  Every moment contains a range of possibilities, and within that range, there is one possibility that aligns most closely to our highest potential.

My highest potential in that moment was not to be pulled into a pattern of arguing, of she says I say.  Instead, I stepped into another path, a path that did not engage in or invite an argument.  Surprisingly, that path still made her argumentative.  She was not arguing on the previous point that I circumvented, instead, she was arguing with me about something that someone else said.  She was deliberately trying to pick a bone with me.

What else was she highlighting for me in my psychological plane?  It was blatantly obvious that she bulldozed over the other member’s conversation to shoot another missile at me, and I listened really carefully inside my psychological plane, to see what exactly was mirroring her emotional missile.  I noticed myself closing up, tightening up.  I went over the trigger point multiple times, in an attempt to release all emotional charges.  But couldn’t.  I went back to her, at which point her aggressiveness had heightened, telling me to educate myself, another way of saying I was ignorant, another way of invalidating me.  But I ignored the invalidation, because that’s not the point I was trying to listen to.  Moving past her animosity, I zoomed in on the thing she activated within me.  I could not discern what exactly that was, but it was big and strong.  It felt like a loop, a repetitive opening and closing, in or around my stomach.  The high speed repetition made me tremble.

I wondered if I could slow it down.  Open.  Pause.  Close.

I asked the angels, and they said, “Now that you’ve asked for help, get out of the way so that we could help you.”  I imagined they wanted to get into my loop and break it.  So I psychologically stepped away, and started singing along to a song that I was playing.  Then joy came into me.  And I danced to it.

Temporarily engaging in other things helped to fully transition me, one step at a time, out of the loop.  Like the way the clouds in the sky shift.  You don’t have to rush them.  In due course, the clouds will move away or change shape.  Similarly, I stayed away from the loop, and in due course, it would shift or change shape. I could not and did not try to force the loop to collapse, because force had the potential to cause more damage.

I hovered around my wound.  An image came to me, of me as a child trying to protect myself, with my meager strength, against an adult who was standing over me, looking down at me with scorn, impatience, and anger, attacking me, talking down to me, squashing me.  I was not allowed to speak, because anything I said or did would be interpreted as a rejection of authority.  I didn’t believe in bowing down to authority, but I was threatened with punishment and attack.  I gave up.  I saw no way out of my situation.  I felt overpowered, helpless, and a very strong sense of injustice.  And that was love.  That experience was to be interpreted as love and care, and I could only respond with gratitude and appreciation.  A further step toward resignation.  Everything I said was going to be wrong.  What’s the point of speaking?  I was not allowed to speak, but at the same time, I also gave up speaking.

At this point I had arrived at the key causing the loop–me not allowing myself to speak. This was what kept me in the loop. To release myself from invalidation, I must also release my self-imposed restriction, because that was fueled by invalidation.

After I addressed that, the forum member softened up in her tone.  I was surprised at the effect of my healing!  The explosiveness and aggressiveness with which she shot her emotional missile was gone.  She sounded more patient too, another surprise to me! But I didn’t let her stop there. I asked her questions. I wanted to engage my voice, which I previously suppressed. I wanted to heal my voice, and to give my inner child the opportunity to speak my mind.

Every time I encounter an unpleasant external reality, I look inward to check my internal reality. What exactly is inside me that is manifesting my external circumstances? By not wasting energy to fight with my external problem, I reroute my energy inward to heal my internal environment, to rearrange it in such a way that it manifests what I want. This has been my healing approach. It has its challenges, but it also has its successes.

The most sustainable and effective change comes from inside out.